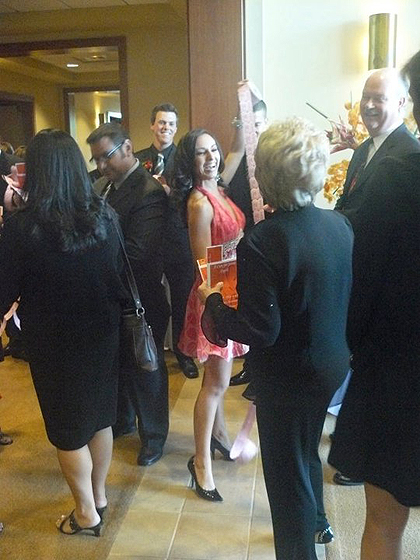 On Saturday, April 9, about 150 people showed up at David’s Restaurant to attend A Cure for Jansie’s Angels, a benefit gala for the Leukemia and Lymphoma Society. Through admission ticket and raffle ticket sales, auction bids, and donations, the event helped raise $10,000.

“The event was touching because we [recognized people who had cancer],” says Jansie Tompkins, the event coordinator of A Cure for Jansie’s Angels. “Things got lively with the auctions and the bidding. By the end of the night, a lot of people were dancing.”

“Everyone came together to make this a successful event,” says Vanessa Vierra, co-coordinator of the event. “On the day of the event, we took everything we did in the past month and put it all together.”

“We had Marissa Shaffer, the Girl of the Year for Leukemia & Lymphoma Society, as our guest speaker,” continues Vierra. “She’s 12 years old and is a survivor of acute lymphoblastic leukemia. She was diagnosed at age 3 and had undergone a 130-week treatment.”

“There were also performances from a pop and hip-hop band called Licked,” Tompkins says. “One of the members had a sister who passed away from leukemia when she was 20, and so he had a song dedicated to her. And the other member’s mom died from cancer. Licked and 4 of Hearts donated their musical performances for the fundraiser.”

Many others donated their services and products. David Goularte and Forest O’Brien volunteered to host the auction. Patti and Dirk Wunderlich donated a Bambi portrait by Thomas Kinkade, which was auctioned off for a whopping $1,700. For dessert, Nothing Bundt Cakes from Los Gatos donated ten dozen cakes in a variety of flavors, such as red velvet and vanilla. Also, Danyelle Horrillo of Bake Laugh Love from Santa Clara donated cupcakes in chocolate with raspberry and strawberry flavors. Tompkins’ younger sisters, Carly and Taylor, made 150 red and orange cupcakes to show the colors of the Leukemia and Lymphoma Society.

Tompkins is currently a nominee to be Leukemia and Lymphoma Society’s Woman of the Year. When she is not volunteering at the local Kaiser Permanente Hospital, where she has assisted children with leukemia, she is busy with her studies at San Jose State University and her duties as Miss Santa Clara 2011.

Tompkins is currently looking for a corporation to offer a donation to match the $10,000 she raised for the Leukemia and Lymphoma Society. To raise more money, she is also planning a family spaghetti dinner on Tuesday, May 17 at Mariani’s Inn and Restaurant, $20 per person.  For more information, contact Tompkins at acureforjansiesangels@gmail.com or call (408) 691-2250.