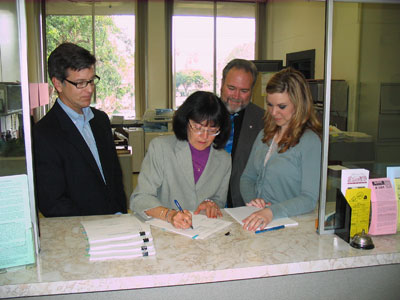 In 1985, after a rocky and highly contentious two-year effort, Santa Clara completed a deal that made the city owner of the 188 acres of land under Great America amusement park. It wasn’t long after that the 49ers indicated their interest in becoming next-door neighbors.

Santa Clara was the leading contender for the NFL team’s new headquarters and training camp, reported the December 2, 1986 San Jose Mercury. “The major attraction is the expanse of land and the price,” wrote the newspaper. Less than two weeks later a deal was in the works.

Critics – including other cities competing for the 49ers HQ – called Santa Clara’s lease terms – $1,000 per acre per year, plus an upfront development fee -“tantamount to a subsidy,” the Mercury reported on Dec. 10, 1986. At the time, business and commercial leases in the area were estimated at $20,000 an acre.

Supporters, however, called it an investment. Saying that land use decisions involve considerably more than the exchange of money, Mayor Eddie Souza told the Mercury that the headquarters and training camp would increase area land values and property tax revenues.

“Benefits also include setting aside the land for open space and leaving it available for future generations, after the 49ers lease expires, Souza said. He also added that he expects the team will build community spirit and get involved in local charities and youth programs,” wrote reporter Brandon Bailey.

Souza had a ready retort to critics arguing that other uses would bring higher financial returns. “The other way the city could profit from that land is by allowing 16-story buildings on it,” he said, referring to the high-density development plan that prompted Santa Clara to buy the land under Great America Park in 1984. “I value the return of the 49ers being in my community.”

In early 1987, the deal was unanimously approved by the City Council. That was the same year the city, under the leadership of former Parks & Recreation Director Earl Carmichael, also took control of the golf course across the street on Tasman Road, when the company operating the course couldn’t sign off on a bond deal. It was also the year the City took steps to purchase the Harris-Lass house as a museum.

The 49ers new Marie DeBartolo Sports Centre – named in memory of former owner Eddie DeBartolo’s mother – opened to great fanfare little over a year later on Aug. 7, 1988. &It’s just fantastic. No, that doesn’t even begin to describe it,” San Diego Chargers owner Alex Spanos told the Peninsula Times Tribune at the opening gala. “It’s the kind of place where you want to come to work.”

Even before the team had moved into its new digs, some people were already thinking about the next logical development. “We’ve already talked about putting in a 49er theme restaurant and another hotel here,” Mayor Souza told the Times Tribune’s Jason Cole.

Eight years later, although the theme restaurant had yet to be built, the 49ers were celebrating the 50th anniversary of the team’s founding and its eighth in Santa Clara.

“For 50 years the San Francisco 49ers have swooped the nation with an undying legacy, and almost the last decade, have made Santa Clara a small part of that history in the making,” wrote Pam Costa in the Dec. 4, 1996 edition of the Santa Clara Valley Weekly.

“From the Santa Clara Vanguards performing at half-time to team players participating and supporting local causes, local 49er faithfuls believe none other than the Niners have found Santa Clara to be their home away from home.”