This Memorial Day Weekend will bear witness to the culmination of a terrific track and field season for two Fremont track stars. Firebird junior Kathir Balakrishnan and senior Trisha Sharma will both head down to Clovis, CA for the high school state championships for track and field.

The two each qualified in their respective hurdle events at the CCS Finals, Balakrishnan in the 110-meter-high hurdles and Sharma in the 100-meter hurdles. Needing to finish in the top three to advance to state, Balakrishnan finished third with a time of 14.34. Sharma finished second in her final heat at CCS with a time of 15.04. It will be the first time competing at state for both Firebirds and their excitement is certainly palpable.

“I’m super excited for it, especially since it’s our first time going,” chimed Balakrishnan after Tuesday’s practice. “I’m really looking forward to it, especially after the season we have had this year.”

“I’m pretty excited for this, particularly being my first full season here,” noted Sharma. “I wasn’t here as a freshman because I was living in India and then when COVID hit that threw off the next two seasons. So, I’m really stoked to have a whole season.”

“Truthfully, this was all about the kids getting to experience a full track season,” chimed Fremont Head Coach Mark Shields. “Almost none of them had ever experienced that. Only the seniors were around when they were freshman in 2019. To have a whole track season has been the most fun thing for everybody.”

That almost didn’t happen again for Balakrishnan. An injury to his collarbone in December required surgery. Doctors told him that he might not be able to compete until the middle of April, but he rehabbed and was able to get a full season in with the team. 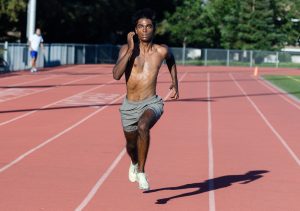 “I had the surgery in early January and initially they said it would be at least six or seven weeks until I can run, but then to hurdle, they said not until mid-April,” recalled Balakrishnan on his prognosis to return to the track. “Fortunately, that changed and I was able to ease back into it much sooner because of the physical therapy we did and how quickly my strength bounced back.”

Having bounced back health-wise, Balakrishnan admits there is still room for improvement on his form as they head into the final meet of the season.

“We still have a lot of technical form stuff that need to come together by state,” noted the junior. “If all those come together and I can execute my race plan, I am aiming to go for a 14.1 or even maybe breaking 14.”

Sharma is also looking to break a second number with her time this weekend.

“I actually have run 14.96, but it wasn’t legal because we had a tailwind that day, so it wasn’t counted. But I know I can run it,” remarked the senior. “I’m trying to go in with no expectations, but hopefully get another PR in.”