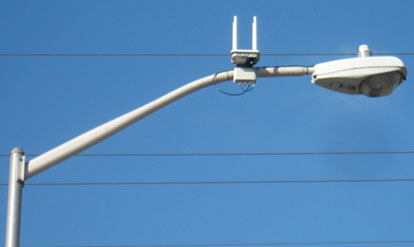 The number of Wi-Fi users for the City of Santa Clara’s free outdoor Internet access is exceeding projections, with over 6,000 active users now logging in at peak periods of the week. Silicon Valley Power (SVP), the city’s municipal electric utility, introduced the Wi-Fi service in March.

“The system is getting over a thousand more users per day than we expected during peak periods,” said John Roukema, director of SVP. “Even on weekends, we’re seeing around 5,000 logins a day. Santa Clara’s residents, workers and visitors have embraced the service, which is made possible by our upgrade to smart grid technology.”

Santa Clara is the first city in the country to provide such free citywide Internet access via its advanced metering initiative. SVP piggybacked a separate free public Wi-Fi channel on the SVP MeterConnect wireless network that will eventually also carry highly encrypted utility data to the city when advanced meters are installed in 2014.

The free, public, and unencrypted outdoor Internet service works best when unobstructed by trees or buildings – the low power signal of some devices can limit their Wi-Fi connectivity. The system features speeds up to 2 Mbps, and is sufficient for normal connectivity that does not entail large amounts of data transfer, such as video and gaming.

SVP says there is plenty of wireless network capacity for the growing number of users, who connect by choosing “SVPMeterConnectWiFi” on their devices when looking for Wi-Fi access.

Silicon Valley Power www.siliconvalleypower.com is the trademark adopted for use by the not-for-profit electric municipal utility of Santa Clara, serving residents and businesses for over 100 years. SVP provides power to more than 50,000 customers, including Applied Materials, Intel, Owens Corning and Yahoo!, at rates 15 to 45 percent below neighboring communities.