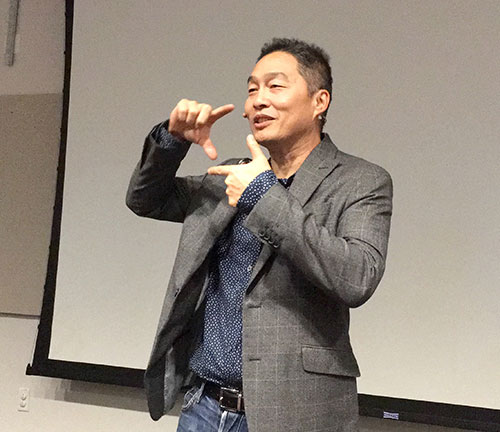 It was standing room only at Northside Library’s community room on March 6. Anthony Lee, presentation trainer, event producer and founder and CEO of Heroic Voice Academy, reminisced about sitting next to supermodel Gisele Bündchen on a plane flight. When the two met, Lee talked about where he worked and his enrollment at Duke University at the time. Lee recalled Bündchen sharing that her work kept her from spending enough time with her mother and sister, and that she was on her way to see her family that she missed. Upon retrospect, Lee decided that Bündchen’s introduction better reflected her values and who she was as a person than his own introduction. In his presentation, Personal Branding for Job Seekers, Entrepreneurs, and More, Lee gave more ideas about making effective introductions.

“My experience is that people aren’t good at introducing themselves,” Lee said. “There’s the common question ‘What do you do?’ and I see people struggling to answer that question even though that’s not the right question. I’d rather ask different questions. ‘What do you believe in? What’s your vision for the future? How can I count on you?’ This gives me a clearer vision of who the person actually is.”

During his talk, Lee described the three V’s that he looks for in a person–their values, vision and vows . On a screen, Lee showed a Message Blueprint, an image of three blank bubbles with question marks below them. Lee felt that once these three foundation pieces were established, one could use them to accomplish a number of things, including assembling a TED (Technology, Education and Design) talk, a keynote speech, an investor presentation and a business partnership.

Working with partners, attendees reflected on what values they had and what they felt the world needed more of. Family, generosity, justice, equality and happiness were among a few of the audience’s named values.

Next, attendees were asked to sketch their vision of what the world should look like in five years. According to Lee, sharing visions allowed two parties to see if they were going to the same place. Lee asked attendees to align their vows by completing the sentence “You can count on me to…”

Finally, Lee gave a demonstration of the Message Blueprint where he incorporated the three V’s.

“I have lived up to the name my grandma gave me,” said Lee, on his values. “[In my Chinese name], there are two middle characters that literally translate to ‘country’ and ‘health.’ So I take that to mean not just a ‘healthy country’ but an empowered community. I spend my whole life building amazing community and making sure they’re all taken care of.”

Sharing his vision, Lee discussed his photographer father who taught him to look for the best in a picture and see the best in people. Regarding vows, Lee said he enjoys asking and answering great questions and that he can be counted on to be curious about others.

After the presentation, attendees headed over to the Yan Can Asian Bistro nearby to practice their new networking skills.

“I learned that it’s important to be leading in what you value,” said Siddharth Bhai, a product manager at a high-tech company who attended Lee’s talk. “The most important takeaway from tonight is being authentic in your introduction and making a genuine interpersonal connection.”