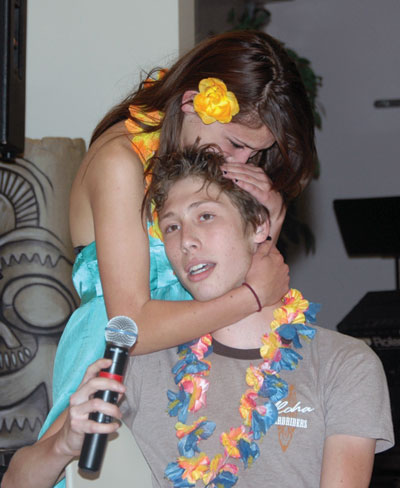 The odds of winning the California Mega Millions lottery are 1 in 176,000,000. The odds of picking all five and the mega number in the California Superlotto are 1 in 41,416,353. Even the most optimistic person would consider those to be very long odds and something that as much as one might wish or hope, will probably never happen to you or someone you know.

Much better, at 1 in 50,000, but something that no one would wish for themselves or anyone, are the odds of being born with a very rare life-threatening disease that will put you in a wheel chair in your teens and eventually kill you at too young an age. Most people would not want to consider the odds of knowing someone with this type of disease, but if you live in Santa Clara and have seen students in high school or the DeJaVu Jazz Band, you might have seen Matt Rupel.

When Matt was 13 years old, he was diagnosed with Friedreich’s ataxia (FA). FA is a very rare, life-threatening disease causing progressive damage to the nerves and muscles. Basically, the disease takes great kids and young men, and, for lack of a better term, hurts them. They’re still the same great people; however, the disease causes slurred speech, muscle and energy loss, vision and hearing problems, the inability to walk a straight line, severe curvature of the spine and heart problems that can eventually kill them. But before that happens, those afflicted with FA will wind up in a wheelchair. But even as all this happens, people with FA are still just as smart as they always have been.

When Matt was 19, FA took away a luxury most people don’t even give a second thought too – their ability to walk across the room, or a street on their own. Matt was forced to use a wheelchair to get around in his daily life. Now 21 and a student at Santa Clara University, Matt comes across like a typical college student. Spending time with him is very revealing. Even with all that life has thrown at him, he seems like one of the most unassuming people you can ever meet. Possessing a terrific attitude, he always seems upbeat and the kind of person you would call when life’s ups and downs get a little too down. His friends agree with that assessment and show it different ways.

Matt’s friends will be working as volunteers at a fundraiser to help raise money for research on finding a cure for FA. The fundraiser is part of FA-ITH – Friedreich’s Ataxia In The Heart. Started by his parents as a way to help raise needed money to pay for research that could help Matt and others afflicted with FA, so far the fundraiser, entering its 5th year, has raised approximately $210,000.

The Fundraiser – How You Can Help

To help, attend the fundraiser on October 8, at St. Justin’s Hall in Santa Clara (2655 Homestead Road) from 6 until 11pm. Billed as – Friedreich’s Ataxia In The Heart – Shoot for the Cure, the night will be a celebration, Las Vegas style with fine food, spirits and entertainment. The event will feature a delicious donated dinner by the Outback Steakhouse (continuing their tradition of supporting the fundraiser), an auction, plus dancing the night away to the music of The Peelers (also generously donating their talents).

According to Matt’s father, Bart, “Nearly every penny of every dollar we collect goes directly to FA research. We’re able to keep our costs low because of the donations and community support – Outback Steakhouse is again donating the dinner, The Peelers are donating their time and nearly all of the waiters are either friends of the family or Matt’s friends, doing what they can to help.

For more information on the fundraiser, please visit www.FA-ITH.org, eMail FAITH.Rupel@gmail.com, or call 707-795-3293 and ask for Paul Konanz. All proceeds will benefit Friedreich’s Ataxia research and are tax-deductible.

What is Friedreich’s ataxia?
by Larry Sacks

According to the National Institute of Neurological Disorders and Stroke, “The first symptom to appear is usually gait ataxia, or difficulty walking. The ataxia (impaired muscle coordination) gradually worsens and slowly spreads to the arms and the trunk. There is often loss of sensation in the extremities, which may spread to other parts of the body. Other features include loss of tendon reflexes, especially in the knees and ankles. Most people with Friedreich’s ataxia develop scoliosis (a curving of the spine to one side), which often requires surgical intervention for treatment. Dysarthria (slowness and slurring of speech) develops and can get progressively worse. Many individuals with later stages of Friedreich’s ataxia develop hearing and vision loss.

“Other symptoms that may occur include chest pain, shortness of breath, and heart palpitations. These symptoms are the result of various forms of heart disease that often accompany Friedreich’s ataxia, such as hypertrophic cardiomyopathy (enlargement of the heart), myocardial fibrosis (formation of fiber-like material in the muscles of the heart), and cardiac failure. Heart rhythm abnormalities such as tachycardia (fast heart rate) and heart block (impaired conduction of cardiac impulses within the heart) are also common.

“The rate of progression varies from person to person. Generally, within 10 to 20 years after the appearance of the first symptoms, the person is confined to a wheelchair, and in later stages of the disease individuals may become completely incapacitated.”