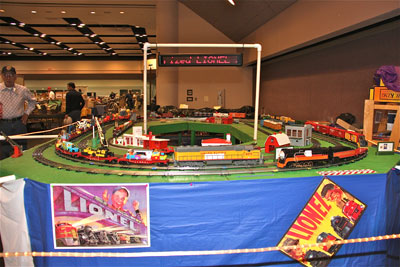 Over the weekend of March 2-4, the Train Collectors Association (TCA) held its annual Cal Stewart Meet. While the first two days of the event were private, the public got a chance to see the massive amounts of toy and model trains at the Santa Clara Convention Center on Sunday.

In 1973, the inaugural year of the event, it was decided by TCA members Don Stewart and John Daniels to create an event allowing West Coast members to have their own meet. Stewart and Daniels surmised this plan during a meet in Oakland in the spring of 1973, just a few short months before the inaugural event in November.

The Cal Stewart Meet – named after Stewart, who died in an automobile accident before the first meet, and its association with California – combined both the TCA and Toy Train Operating Society (TTOS) making for a mega-sized meet. It is hosted by the Nor Cal Division of TCA.

Today, there are two massive meets held annually, the Cal Stewart Meet on the West Coast, and the York Meet, held in York, Penn., nearby to the Strasburg, Penn.-based 501c3 TCA.

For more information on TCA and future meets held by the Nor Cal Division, log onto www.norcaltca.com.