A community-wide effort is currently underway to save a small Rivermark bagel shop that has been in business for 15 years. Terry Eng, owner of Posh Bagel, is likely to lose her location and be forced to close the loved bagelry, which is one of only two places in Rivermark Village serving breakfast.

According to Eng, the Posh Bagel’s lease was up in March and she had been working with the leasing company, Colliers International, on a long-term lease that would keep Posh Bagel in the plaza for years to come. Those negotiations, which initially resulted in a temporary reduced monthly fee, went sour just a few weeks ago.

On Sept. 30, Eng received a message from the leasing agent detailing rent for a new tenant as roughly $11,000. Eng responded on Oct. 1 asking to meet with the leasing agent to discuss her lease. A week later, on Oct. 9, Eng said she received a text message informing her that a tour with a contractor and architect for the new tenant would take place the following day. During that tour, Eng said, she learned there was a new tenant, a Korean BBQ restaurant, scheduled to take over her space and join a number of new restaurants opening at Rivermark in the coming months.

Eng said she was upset and hurt by the lack of communication and that negotiations to stay in the plaza ended so abruptly.

“I have been a very good tenant for 15 years and am a small business,” she said. “I start working at 3 a.m. to 6 – 7 p.m. in the evening and haven’t taken a day off in seven years. This is my livelihood. I want to stay here for a long-term lease and serve the customers and community because this is a very friendly environment. The community has nowhere else. Peet’s is the only other place for breakfast.”

A native of Cambodia, Eng said she was a young girl when the Khmer Rouge regime took over the country resulting in the Cambodian Killing Fields and death of approximately 1 million people. Years later, she immigrated to the United States. Upon arrival in 1998, Eng sought out her own American dream.

“I’m an immigrant and it was my dream to save up money and put all the money together to have this business,” she said. “I’m so proud to be an American citizen, to be here, have a small business to serve this community, have my dream and put my kids through school to get educated and be good citizens and people in society. It seems so unfair to me to suffer and unfair to everyone who has been through what I’ve been through.” 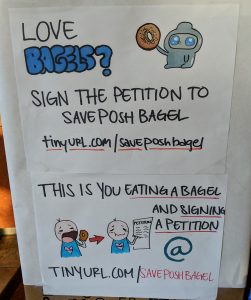 Efforts are being made, through community support, to save the Posh Bagel, including a Change.org petition and involvement by Santa Clara Council Member Kathy Watanabe (D1).

Watanabe, who has known the Engs for more than 15 years, said she visited Posh Bagel the morning after Eng called City Hall and requested to meet with her. Once learning additional details, Watanabe spoke with the leasing agent about the future of empty spaces in Rivermark Village, the beloved restaurant, community concerns with losing it, the Change.org petition and why Eng, who is a single mother, should have the opportunity to continue operating.

“I have known Terry Eng and her daughter, Cindy for over 15 years,” she said.  “Our daughters also went to Don Callejon School and Santa Clara High School together. My family has seen how hard Terry and her family worked to make Posh Bagel successful. They are a staple of the Rivermark community as well as Rivermark Plaza,” said Watanabe. “This is a female-owned business that deserves the opportunity to be successful.”

Even with Watanabe’s involvement and the outpouring of support from Santa Clara residents, it appears, however, as if Rivermark Plaza’s property management company, Vestar Capital Partners, is no longer interested in the Posh Bagel concept.

“While we certainly empathize with the owner’s desire to stay at Rivermark Village, surveys conducted by consultants for Rivermark Village have indicated that our shoppers desire a new and different kind of tenant mix,” said Regional Director of Marketing Heath McCue. “Decisions such as these, while never easy, are a normal course of doing business as shopping centers grow and change. Therefore, while we are sorry to see Posh Bagel go, the natural expiration of its lease is a transition that gives the shopping center an opportunity to pursue new offerings that better complement and enhance our existing tenant mix. We certainly hope to part on friendly terms, and we wish Posh Bagel every success in its next location.”

McCue said he was unable to comment on the timeline in which Posh Bagel will need to vacate Rivermark and would not confirm if a new lease had been signed by another tenant. Eng, however, remains hopeful her shop will be saved and believes the community will not be as welcoming to a Korean BBQ concept.

“[Vestar] never thought that the whole community will no longer have a breakfast place to go to,” she said. “The community needs somewhere other than Peet’s. Most of the community is vegetarian and [Vestar] never realized that or they don’t care. You do business for the customer and the community and study what the community is looking for. How many people will be attracted to a plaza where there’s nothing for the morning? This is so wrong.”