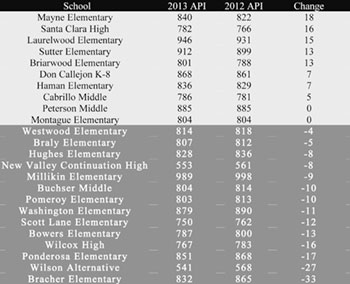 Since 2009, Santa Clara Unified has been trying to buy the state-owned former Agnews Developmental Center (Zanker between Center Road and River Oaks) property as the site for a new K-12 school campus to serve the rapidly growing North Santa Clara and San Jose area of SCUSD.

But the plan was held up because no agreement could be reached with the California Department of General Services (DGS), which wanted to sell the property, possibly as part of a larger parcel, to the highest bidder.

The bill is more than half way through the process, reports Canova, and only needs to move out of Appropriations and to each floor for a vote before going to the governor for his signature.

A site visit by potential bidders for the property is scheduled for Oct. 3.

“While it is not intended to be held for purposes of securing public comment, DGS will be there along with Santa Clara Unified officials and any other interested parties,” says Canova. “Given that this is a public event, it seems appropriate that community members and parents would be welcome to attend. There are many ways that our community members and parents can help emphasize the urgency for this site to house local schools and open park space.”

When AB-503 was first introduced, the DGS “was insisting on a price tag for the property that was simply well beyond the true market value,” Canova explains. “In the negotiations with DGS last year, they asserted that if we did not simply accept their price, the Department would move to a public RFP, allowing any responsible bidder to pursue the purchase of the land. In that context AB503 was crucial.”

Currently, however, no one else seems to be interested in the land. But AB503 remains important because even if the school district is the highest or even the only bidder, without the legislation the DGS can still reject the district’s proposal.

George Mayne Elementary offered a bright spot in this picture for SCUSD. A school where nearly three-quarters of the students are eligible for free or subsidized lunches, Mayne was at the top of the API class with an 18-point improvement, closely followed by Santa Clara High with a 16-point API increase, and Laurelwood Elementary with a 15-point improvement.

APIs declined significantly in two schools where the board has attempted to inject itself directly into school operations and management during the last school year. Bracher Elementary showed a startling API decline of 33 points – putting that school dead last in the district – while Wilcox high school also showed a dramatic 16-point API drop.

Bracher was the locus of a controversial effort by SCUSD Trustees Ina Bendis and Christopher Stampolis in December 2012 to extend – by board fiat rather than through the normal district procedure of research and recommendation – the K-5 school to six or eight grades beginning in September 2013.

Stampolis’ children attended the school, and, as chair of the School Site Council, he contended that a parent survey had requested the change. To date, no survey results have ever been made public, nor have any surveys been produced by the district or school in response to WEEKLY requests.

The attempt failed, but not before tens of hours of board meeting time had been consumed by arguments over it.

In the case of Wilcox, science and math teacher Karen Hardy directly requested the board – instead of the school’s principal or then-Superintendent Bobbie Plough – to add more sections of her computer science classes.

Hardy is an open political ally of Bendis, as well as of Board President Christine Koltermann and Trustee Michele Ryan – the three were active spokesmen for the anti-stadium political committee Santa Clara Plays Fair.

The irregular request caused hours of board meeting time to be consumed explaining the complex processes involved in master scheduling a high school with more than 400 weekly classes. In addition, the board also voted in June, against staff recommendation, to allow the enrollment of over 70 additional students on Wilcox’s waiting list.

It also seems that being a magnet school is no inoculation against declining ratings. SCUSD’s Millkin Elementary – with its reported 400-name waiting list and its vaunted teacher-directed, back-to-basics educational methods – saw its API score drop by 9 points.

How much these ratings mean is open to question, however – especially with U.S. schools moving to Common Core national standards and an entirely new evaluation system in the next few years. Recognizing this, the California legislature is considering a bill, AB 484, suspending the current STAR tests while new assessments – Measurement of Academic Performance and Progress (MAPP) — are themselves assessed.

In remarks to the State Board of Education last month California Superintendent of Public Education Tom Torlakson questioned the point of continuing the current API evaluations in the interim.

“It’s time for a clean break from assessments that are out of date and out of sync with the work our schools are doing to shift to the Common Core. It’s simply wrong to expect schools to prepare our students for the future while continuing to ask them to use tests that are products of the past.”