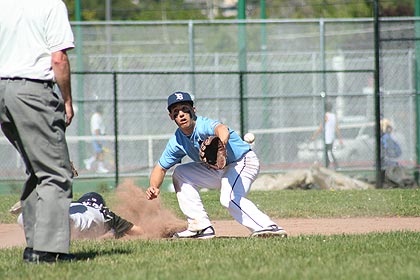 “Put me in, coach – I’m ready to play, today.” That line from John Fogerty’s Centerfield has become somewhat of a summer baseball anthem. With the smell of freshly cut grass, the sound of a bat cracking as it makes contact with a speedy ball, and the roar of crowd, fans of this summertime staple sport (mostly) relax in their seats enjoying peanuts, beer and ballpark franks. But, rising inflation, out of control gas prices and a lack of extra funds, many find themselves watching from afar and attempting to find the emotions felt at the ballpark in their living rooms. But, what if there was an alternative? What if there was quality baseball team closer to Santa Clara than the Oakland Athletics and San Francisco Giants and cheaper than the San Jose Giants? Better yet, what if the cost of admission was free?

This semi-pro baseball organization was founded in the summer of 2007 when general manager Greg Fanara decided to build his own team. He rounded up some of the guys he played ball with in high school and the Santa Clara Braves were born. After spending its first three seasons as members of the San Jose National Adult Baseball Association, the team, now called the Santa Clara Dynasty, joined the SVABL.

“In 2007, we were the Santa Clara Braves and myself, Stan Chan and [Jordan Fanara] were the originals,” said Santa Clara Dynasty General Manager Greg Fanara. “It started as a group of friends and we had a great season. We won the championship. Then, our inaugural summer season was 2008. We struggled. We didn’t have a lot of talent. I believe we went 11-11 and then midseason, the trade that basically put us where we are now, is when we signed our catcher, Scott Soliday and [pitcher] Kyle Hatzenbuhler, who is literally one of the best right handed pitchers in the Bay Area.”

Since the signing of Hatzenbuhler and Soliday, the Dynasty have continued to grow by adding high-caliber players each season. Last year they added a team manager, Rick Hatzenbuhler, who had coached little league, high school and semi-pro baseball teams for years. “It really turned things around because I was able to focus on playing and everyone else was able to have someone they could respect in the dugout,” said Fanara. The move paid off. Last season, the Dynasty ended the year on an 11-game winning streak and was crowned SVABL champions.

“We have a unique group of gentlemen on this team. Besides talent, which is second to none, we have a very loose team and I think that’s what attracts players to our team. You can come and have fun, but also win. I actually think that has a lot to do with us winning,” said Fanara. “Guys come here. They’re loose. They have fun but they also put in the time to go out the batting cages and they work hard. We have nicknames. We make fun of guys. We’re very sarcastic but everyone knows it’s tough love. We want everyone to realize their potential.”

This “unique” group of gentlemen also have high hopes about repeating as champions. “From what I understand it’s pretty difficult to repeat as champions,” said Fanara. “With the combination of Kyle [Hatzenbuhler] who led the league in wins and strikeouts by a landslide last year, and this new kid [former Campbellsville University pitcher] Eric [Mattos] and my younger brother Jordan [Fanara] who – he’s dirty – and throws hard as well, we are really optimistic about repeating this year.”

The Santa Clara Dynasty play at James Lick High School. This Saturday, May 15, the Dynasty have a doubleheader against the SVABL Reds. The first game is at 10 a.m. followed by a 1:30 p.m. match up. James Lick Field is at 57 N White Rd in San Jose. Parking and admission is free. Additional information about the Santa Clara Dynasty can be found at www.scdynasty.com.