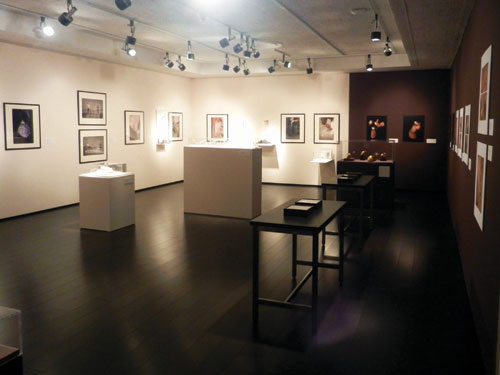 Body modifications have long been part of various cultures. From simple modifications like tattoos and piercings to surgical procedures like dermal implants and tongue-splitting, changing the way one looks has become a form of empowerment and self-expression. The deSaisset Museum is currently exploring the idea of body adornments as a blur between jewelry, sculpture, fashion, photography and performance in its Jeweled Prosthetics: Jewelry as Extension of Self exhibit.

Featuring jewelry-makers and metal-workers Catherine Grisez and Lauren Kalman, Jeweled Prosthetics is a series of photographs and sculpture featuring the pair’s jeweled prosthetics.

“The glittery objects, surgically removed, and the “before” images on display by Grisez and Kalman in Jeweled Prosthetics examine the inextricable connection between adornment and the body,” says the deSaisset’s Guest Curator Melissa Behravesh in her statement explaining the exhibit. “Like medical prostheses, the wearable objects in Jeweled Prosthetics strive for seamless integration with the body – a “custom-fit” for the wearer, whether through force or by design. However, unlike medical prostheses, which aim to conceal deformities, the gleaming prosthetic gems featured in Jeweled Prosthetics highlight and embellish the wearer’s seen or unseen traumas, diseases, or imperfections. Both artists, through the lens of contemporary art and their individual perspectives, challenge and redefine jewelry’s perceived values and meanings. The body of work featured by Grisez and Kalman in Jeweled Prosthetics reflects art jewelry’s ability to blur the boundaries of many disciplines and to bridge the divide between contemporary art and craft.”

Some of the pieces, like Kalman’s “Oral Gem” – a large gold sphere fixed to the wearer’s teeth and protruding out of his mouth – look more painful than artistic, while Grisez’s “Liberator” – a flowing design of copper, sterling silver, pearls feature butterflies and silicon – seamlessly shows the “extension of self” concept in a subtle and simple way.

In Grisez’ “Survivor,” copper, sterling silver, coral, red jade, rose quartz, and vintage earring findings are used to create a prosthetic that spills from the wearer’s arm to the floor. The piece is vertically attached inside the wearer’s wrist. After attached, the piece makes it look as if the wearer has sliced open their wrist. Sterling silver strands flow out from the wrist and spill to a mound of coral, red jade, and rose quartz on the floor – almost as if the jewels are blood dripping from the “open wound.” In a way, Grisez has found a way to beautify, without glorifying, an attempted suicide.

In addition to “Oral Gem,” “Liberator,” and “Survivor,” over 20 additional of Grisez and Kalman’s prosthetics sit next to photographs of the device in use, allowing the viewer a better understand of how the piece attaches to the wearer.

Jeweled Prosthetics: Jewelry as Extension of Self is on display at the deSaisset Museum until December 2.

The deSaisset Museum is on Santa Clara University’s campus at 500 El Camino Real in Santa Clara. The museum is open Tuesday through Sunday from 11 a.m. to 4 p.m. For additional information visit www.scu.edu/desaisset.