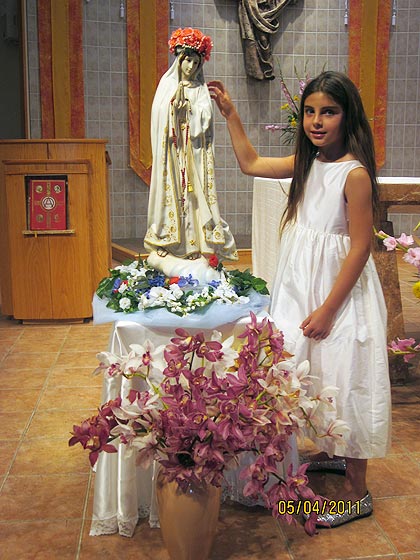 One of the charms of the City of Santa Clara is the way this town preserves deeply rooted traditions – not as museum artifacts but as living, breathing expressions of life, hope and faith in the present.

Think of the January’s Señor Santo Niño (Holy Child) festival at Our Lady of Peace Church. Or the Portuguese Sociedade do Espirito Santo’s (S.E.S.) Festa Do Divino Espirito (Feast of the Holy Spirit) in early June. Or the Crowning of the May Queen last week at St. Justin’s Church.

The May Queen is part of Catholic devotions honoring the Virgin Mary – the mother of Jesus – during the month of May. The May Queen is a young girl, dressed in white, who leads a procession to Marian shrines and places a flower crown on an icon or statue. The earliest Christian references to the holiday go back to the Renaissance.

Other tradition links the May Queen with the medieval Celtic spring festival, Beltane, and others with Maia, the Roman Goddess of Springtime – both of which marked the halfway point between the Spring equinox and the Summer solstice, and the time to begin planting in northern Europe.

Every year St. Justin (www.st-justin.org) preserves this tradition during the first week of May. The celebration begins in with procession from St. Justin’s garden into the church, followed by traditional prayers and hymns.

For those who regard Marian devotions as an alien kind of idolatry, the May celebration is “grounded in our collective sense of history,” said St. Justin Parochial Vicar Father Edsil Ortiz. He noted that the title of Theotokos (“God bearer”) was assigned to Mary during the first two centuries of Christianity.

“We do not worship Mary as outsiders might think [as idolatry],” he said. “Instead, it is proper to say that Marian Spirituality is an essential component of Catholic spirituality, that is very much rooted in…apostolic tradition and…scripture.”

Marian devotion also holds an interesting – some might even suggest prophetic – role connecting Islam and Christianity. The mother of Jesus is highly venerated in Islam and the Qur’an refers to Mary more often than does the New Testament.

The North African, Muslim Moors controlled Spain and Portugal for nearly 800 years. That influence endures to this day in the name of the Portuguese town of Fatima, famous for a series of visions of the Virgin Mary that reportedly took place there in 1917.

Tradition says the town got its name from the Princess of Ourem, who was named Fatima in honor of the Prophet Mohammad’s daughter.