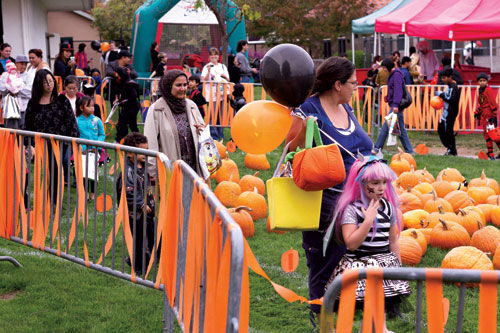 It’s not every day that you get to see princesses, dragons, cowboys, and bumble bees mingling among each other while a family masquerading as the Incredibles brushes past another family of Sesame Street characters. Such is the wonder that came with the Children’s Halloween Party at the Walter E. Schmidt Youth Activity Center on Wednesday, October 31st.

“We usually get about 1,500 people coming here each year,” says Gayle Ichiho, the recreation supervisor of Santa Clara’s Parks & Recreation Department. “The party is a safe alternative for all the younger kids [who might not go trick-or-treating].”

Donning a Ghostbuster costume, Ichiho thanked the local ABC Pumpkin Patch for donating pumpkins to the event’s pumpkin walk, a game where players can win prize pumpkins if their numbers are drawn. She mentioned the Wutzit Club alumni for their $900 donation, which went towards the event’s toothsome treats. Ichiho also credited her staffers and volunteers for their work at the event.

The efforts to provide a recreational and stimulating environment to party attendees paid off. Children jumped around in the bounce houses, busied themselves in the crafts area, and visited booths for candy and treats. Smiling parents carried their prize pumpkins from the pumpkin walk back to their cars. A costume contest brought dozens of children onto the stage, while flashes from their parents’ cameras lit up the hall.

Mazie Roxx attended the party dressed in an Elmo-themed plush red dress while her husband wore a Big Bird costume and their 13 month-old son came as Cookie Monster.

“We like to do family themes with our costumes every year,” Roxx says. “I like the contests, games, and the jumpy houses here. My son is having fun exploring.”

“My daughter liked the balloons,” says Yana Mostitsky, who attended the party with her 18 month-old daughter, a pastel butterfly.

“They have a toddler play area and the trick-or-treat stations here are really cute,” says Kathy Dunning Townsend, enjoying the party with her husband and two year-old son, who came as Yoda from Star Wars. “We like watching Teacher Sean.”

At the party, music teacher Sean Mendelson performed and led the Halloween-themed musical entertainment. Children and their families danced with scarves to Michael Jackson’s “Thriller.” Mendelson, who came as Shaggy in brown corduroy pants and a bright green shirt, also danced to the Scooby Doo theme song with his son, dressed as the famous canine sleuth.

“Music really hits the note- if you pardon the pun- with the minor key,” Mendelson says. “The minor key is associated with Halloween. So I performed the ‘Wheels on The Bus’ on a minor key while the kids [made noises with sticks]. The children really get into the spirit of Halloween here.”