On Saturday, Santa Clara voters received a hit piece from a gray money PAC endorsing Don Rocha and falsely accusing his opponent Susan Ellenberg of taking donations from the 49ers. The mailer showed a faked picture of a check signed by Jed York and made out to a non-existent campaign committee.

There are no 49ers donations of any amount to Ellenberg’s campaign, verified by the California Secretary of State’s and the County Registrar of Voters’ websites. Nor is there any such committee “Elect Susan Ellenberg,” according to the same sites.

“I have no relationship with Jed York or the 49ers,” said Ellenberg. “None of their issues are county issues and I have no reason to engage with them.”

The $25,000 that Ellenberg is falsely accused of taking was donated to a county PAC, Innovation For All, which has made independent expenditures in this election endorsing Ellenberg as well as Kalen Gallagher and Pam Foley for San Jose City Council.

Innovation’s donors — all but one are individuals — include Carl Guardino, head of Silicon Valley Leadership Group; Barry Swenson Builder Corp.; and several Bay Area executives and investors. No other PACs are donors, according to current reports. The 49ers have made direct donations to California Assembly candidates Ash Kalra and Evan Low, and State Senate candidate Bob Wieckowski.

The fake check mailer isn’t the first ugly hit piece against Ellenberg in this campaign.

Earlier this month the San Jose Police Officers Association PAC took an even lower road in a $28,000 mailer that attacked Ellenberg for not being “from our community” and for “not being on our side.” 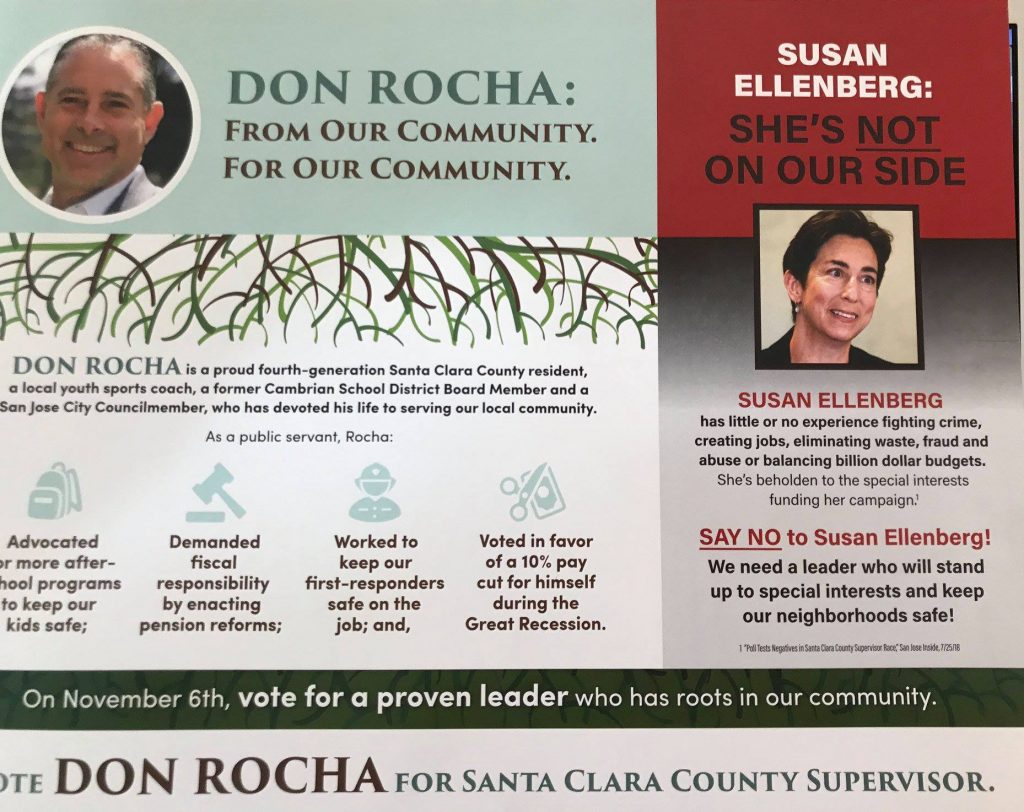 The Santa Clara anti-Ellenberg mailer was put out by the gray money committee “Working for a Better Community PAC, A Committee to Support Donald Rocha for Santa Clara Board of Supervisors, District 4, 2018.” The PAC’s donors include:

Several of these organizations also donated directly to Rocha.

AFL-CIO COPE spent $510,000 to date on pro-Rocha ads and also donated $10,000 to the San Jose Police Officers Association PAC, which is a direct donor to Rocha as well making independent expenditures endorsing him.

Many of Rocha’s donors and PAC backers have also donated to Santa Clara candidates Lisa Gillmor and Nancy Biagini.

Correction: A previous version of the article wrongly called Pam Foley, Karen Foley. The error has been corrected. Thank you to the reader who pointed out the mistake.