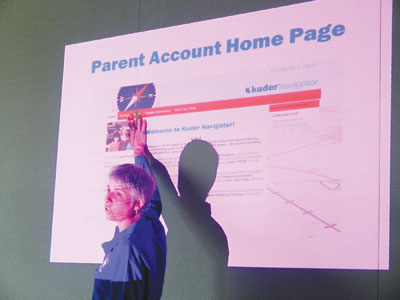 In Santa Clara County, only 25 percent of Latino and Hispanic students have completed the courses required for entrance into the California State University or University of California system (statistic: sccgov.org). The Santa Clara Unified School District is trying to change that. For the past 11 years, the district has held a conference to help educate Spanish-speaking parents about the importance of getting their kids to college. This year’s event was held on October 20 at Santa Clara High School.

“It’s an outreach directly to our Spanish-speaking parents to allow them to get resources they might need and to do parent education,” said Tabitha Kappeler-Hurley, SCUSD’s public information officer. “There are 3,600 families that speak Spanish in our district – that’s the primary language at home and kids are becoming bilingual through their schooling…[We offer these classes in Spanish] so [the parents] know they’re part of the community and can get access to programs they may want or need. So doing it in a language that they fully understand is going to ensure that they get the correct information and not have any misunderstanding due to the translation process.”

Parents were treated to coffee and pastries before attending a morning seminar on topics like four-year planning and recognizing the signs and symptoms of autism. After the hour and a half informational lecture, they were able to meet with representatives from colleges and the Central County Occupational Center (CCOC) in San Jose before filling back into classrooms for a second seminar on topics like the Bill Wilson Center and the “Dream Act.”

“[SCUSD school board candidate] Albert Gonzalez sent me an e-mail last night and let me know that this was going on and it was being sponsored by the district and I wanted to come and see what it was all about,” said SCUSD school board candidate Jim VanPernis. “I am very supportive [of this program]. I went to the session about the Dream Act and what President Obama has done and I think it’s a wonderful thing that he’s done to try to help undocumented students with [education]. I listened to the session and got what I could out of the session and I see that there are a lot of services out there. Between the first and second session I had a chance to talk to the Bill Wilson Center and CCOC…I’m going to be in this session about the Bill Wilson Center next and I’m looking forward to what they have to say.”

SCUSD’s Migrant Education Program sponsored the event, but all Spanish-speaking parents were invited to attend. “This is a service to our parents but it also allows them to create a community because there’s a lot of intellectual information stuff they need, but there’s also a lot of time to talk parent-to-parent and we don’t have a lot of time built in for that at the schools,” said Kappeler-Hurley. “So I think the reason people come back year after year is because they’re getting what they need.”

Arts & Entertainment Community
Author Carolyn SchukPosted on September 23, 2022
Santa Clara’s Art & Wine Festival returned after its two-year COVID hiatus, and for the 20,000 people who came out on Sept. 17 &...