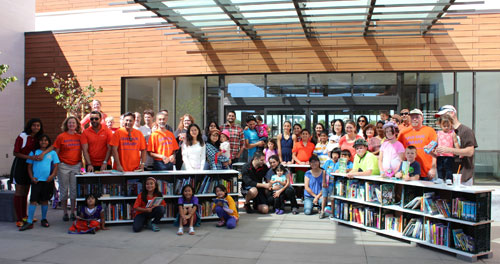 Half a dozen book shelves, constructed with donated milk crates, are sitting outside the Northside Library. The shelves are filled with books, donated by community members who came to celebrate the opening of the milk crate library on September 29. The Northside Library remains closed after the county issued a temporary restraining order that required the city to halt spending on library construction. The city denies the claim that it used restricted redevelopment agency funds to build the library after the state dissolved redevelopment agencies.

“I’ve seen examples of little book lending libraries on Pinterest, and some community members and I came up with the idea of having a ‘bring one, take one’ library,” says Maureen Medeiros, a Santa Clara resident.

The event brought 150 community members together. Raj Chahal and his son constructed the bookcases by hand. Kathy Watanabe, a library foundation board member, welcomed attendees. Bonnie Malonf entertained families with storytelling. Maya Singh, a student at Don Callejon School, and Enakshi Vyas, a visiting relative, performed dance routines. Participating in the ribbon cutting were members of the Santa Clara Chamber of Commerce; including Lidia Blair, owner of Pizza Party in Santa Clara, and Elizabeth Williams, V.P. of marketing at The Tech Museum.

The daughter of a librarian, Santa Clara resident Elizabeth Morris has a personal connection to libraries.

“I have a strong relationship with books, especially children’s books, and I want my kids to have a library they can enjoy,” Morris says. “It’s very frustrating to see the building with the construction flags still around it when it’s 99 percent done.”

The Santa Clara County Board of Supervisors will host a meeting on Tuesday, October 8 at 9 a.m. at 70 W. Hedding Street in San Jose.

“At the October 8th meeting, County Supervisor Ken Yeager will be bringing a resolution to the full board of supervisors that would designate as a county priority state legislation to exempt library projects that have been caught up in the redevelopment dissolution process,” says Maria Daane, executive director of the Santa Clara City Library Foundation and Friends. “If this passed at the county level, supervisors would then look for a willing state legislator to carry such a bill through the state legislature.”

According to Daane, this favorable scenario could enable progress to resume at the Northside Library.