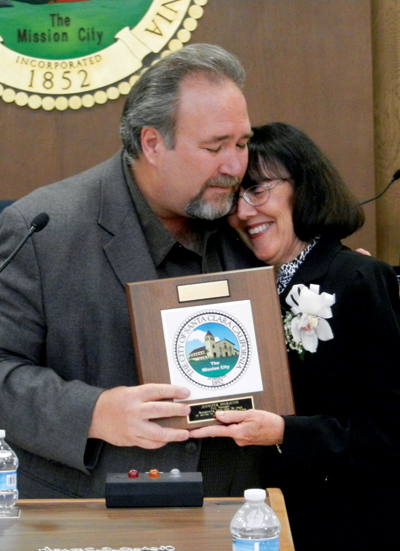 It’s a testimony to Jennifer Sparacino’s unpretentious manner that it’s only when you stop to reckon Santa Clara’s achievements during her 25 years as City Manager that you realize Sparacino’s accomplishments for any given year rival anyone else’s for a lifetime. Or as former Santa Clara Director of Public Works Steve Mashimo put it, “What an extraordinary career!”

On July 6, the City Council Chambers overflowed as the community gave Sparacino an affectionate farewell after her 37-year career with the City. The event was capped by a special rendition of “Thanks for the Memories” by City Hall’s own holiday carolers.

There’s a sense in which Sparacino’s career as City Manager began and ended in the same few acres of Santa Clara real estate that are home to the Great America theme park and soon to be home to a San Francisco 49ers football stadium.

Sparacino’s first project in the City Manager’s office was carrying out the City Council’s decision – not without controversy – to purchase Great America; preventing the sale of the park to a developer who was planning to build high-rise office buildings on the site.

After a Council vote to go ahead with the purchase, City staff worked most of the night signing papers in San Francisco, according to then City Clerk Judy Boccignone, driving back to Santa Clara in the morning to put in a full work day.

Twenty-five years later, one of Sparacino’s last official acts as City Manager was inking agreements for a major league football stadium in Santa Clara, which will sit on land that was part of the 1983 Great America purchase.

In between those two landmark achievements, Sparacino spearheaded and saw-to-completion a roster of public projects that is truly breathtaking when considered in total.

Testifying to Sparacino’s concern for the whole community, she also leaves the city with $158 million in low- and moderate-income housing – despite California’s outsized real estate prices. Her drive to keep Santa Clara as a city where every member of the community could afford to live reflected Sparacino’s principled vision of public service.

“Every citizen matters, every question is answered, every idea is considered,” said former City Council Member Joe Kornder, describing Sparacino’s management of the City. Speaker after speaker throughout the afternoon echoed the theme.

“She is a role model for all City employees, and treats every concern with kindness and thoughtfulness,” echoed Council Member Pat Kolstad.

And former Deputy City Manager Ron Garratt noted that Sparacino was known for her “positive, collaborative relationships across the board with City staff, elected officials, and the public.”

Sparacino’s ability to achieve results was also a product of her clarity in defining the standards and objectives of City operations and communicating them in unmistakably clear terms. In Santa Clara, Sparacino’s mantra of “on time and under budget” is a tagline likely to be as enduring as Clint Eastwood’s “make my day.”

Garratt is stepping into Sparacino’s shoes as interim City Manager. In yet another testimony to the hard-working Sparacino, Garratt noted that while he’d only been on the job three days, he had yet to eat lunch once.

City Politics
Author Carolyn SchukPosted on February 12, 2014
Almost exactly one year ago, Julio Fuentes began his new job as Santa Clara’s City Manager. And in his work over that year, Fuentes...

City Politics
Author Carolyn SchukPosted on April 13, 2016
Super Bowl Impact – Hotel Tax Revenue Up Hotel (TOT) tax collections are running well ahead of budget for FY2015-16, according to the March...

City Politics
Author Carolyn SchukPosted on October 19, 2020October 20, 2020
It appears that Santa Clara City Hall has finally gotten its wish for a bogus news channel to spoon feed people their version of...
SPONSORED