Santa Clara Citizens Advisory Committee Member Sudhanshu Jain recently emailed Acting City Clerk Jennifer Yamaguma asking if the City would provide support for this year’s elections, as it has for many years.

City Hall’s answer was a resounding ‘No.’ 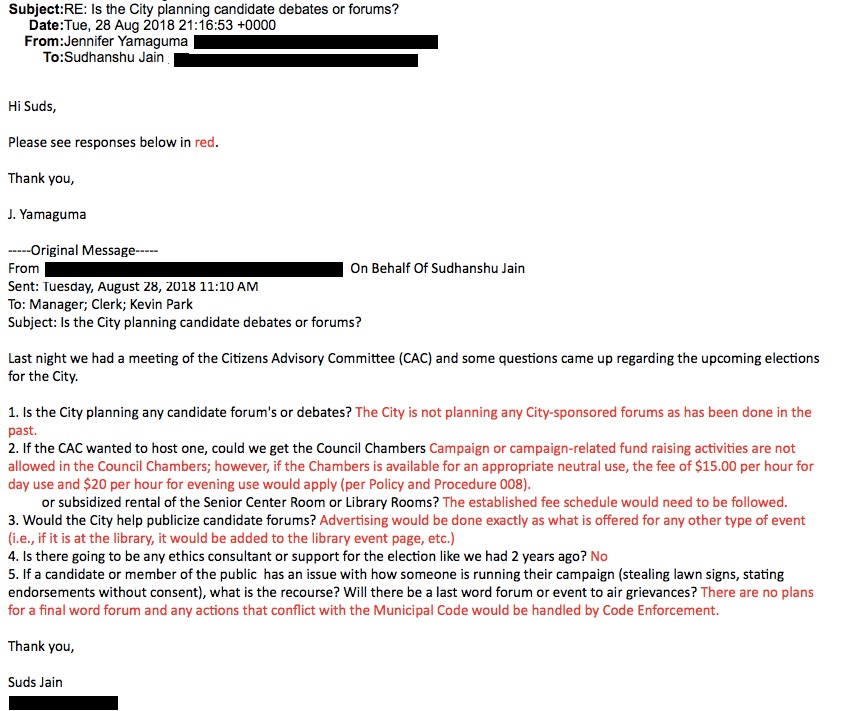 Santa Clara won’t be sponsoring candidate forums. No City venues will be provided for forums unless someone wants to rent them at regular rates, “per Policy and Procedure 008” and the City won’t put out information about any forums.

There will be no ethics review and no “Last Word” giving candidates a chance to set the record straight. “Any actions that conflict with the Municipal Code would be handled by Code Enforcement.”

In other words, if your opponent sends a mailer libeling you as a polygamist, too bad. If that mailer doesn’t have an FPPC number, file a complaint with the department that handles complaints about neighborhood eyesores.

So it isn’t surprising that City officials will do nothing that might encourage voter engagement in a new system that’s likely to remove them from power or hamper historically dirty campaign tactics.

In fact, by doing nothing City Hall is doing everything it can to promote voter ignorance, uncertainty and confusion and foster dishonest and unethical campaigns. Expect to see cash-filled envelopes, unreported donations, Roger Stone-style dirty tricks and maybe even a City Hall — secretly — financed fake “newspaper.”

It all adds up to another variation on the theme of voter suppression.

You can find out about the kinds of programs Santa Clara used to have at http://santaclaraca.gov/government/ethics-values/election-and-public-outreach-information

About three hours after the Weekly published our Editorial Board, the City backpedaled a bit. They released a statement to clear the air since so many Santa Clarans shared their concerns about having no City-sponsored candidate forums. 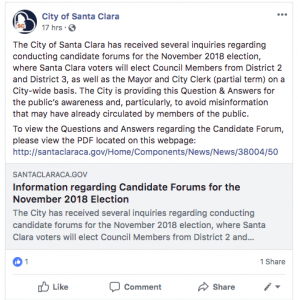 Basically, they clarified, almost point for point, the answers Jennifer Yamaguma sent to Suds Jain in the above email.

The big take away is that City Attorney Brian Doyle and City Manager Deanna Santana looked into the ways the City of Santa Clara conducted itself in past elections and deemed it inappropriate.

Interesting that out of all the many City-hired consultants and richly paid lawyers that are constantly rotating through Santa Clara the City Attorney and City Manager find a City-hired consultant to run a candidate forum — something that is a very popular event — or a City-hired ethics consultant — to monitor the historically dirty campaigns — as the most unnecessary and an inappropriate use of funds.

As a side note, readers may notice that the word “neutral” is commonly used throughout the statement. We think this term will get some use in ways that are anything but neutral during this election.

Op-Ed
Author Robert HaughPosted on August 5, 2015
The pomp and circumstance surrounding the opening of Levi’s Stadium seems to have been mere months ago, but the home of the 49ers opened...

Op-Ed
Author Santa Clara WeeklyPosted on February 26, 2014
When Levi’s Stadium opens later this year, a handful of Mission College students will have their hands involved in almost every aspect of the...