The parcel has a one-story ranch house built in 1955 by the former landowner, predating the Eichler developments.

“Both [Eichler] residential complexes remain largely intact,” the complaint says. “Allowing for this design in a central area between the two complexes would irreparably harm the historic fabric.”

The City approved the proposed project without an EIR, giving it a “mitigated negative declaration;” saying, in effect, that there’s no substantial evidence that the project would have a significant impact on the integrity of an historical neighborhood. The definition of “environment” in the California Environmental Quality Act (CEQA) includes historical significance.

The complaint alleges the City ignored “substantial evidence” that should have led to different decisions. The plaintiffs say that they have exhausted all administrative channels, and their only recourse at this point is to go to court.

First, the City approved the project “without preparing an EIR to inform its decision” when there was considerable evidence of potential impacts to aesthetics, sightlines, light and views.

Second, the City’s decision against preparing an EIR wasn’t “supported by … evidence in the record.”

The Council rejected the Santa Clara Historical & Landmark’s Commission recommendation to delay any action on the proposed development until the State had considered Pomeroy Green’s qualification for the National Register of Historic Places —as well as the HLC’s recommendation to include the Pomeroy Eichlers in the City’s 2015 historical preservation ordinance.

The third claim is that the City failed to make the proper finding about eligibility of Pomeroy Green — which backs on to the proposed development — as an “historic resource for purposes of CEQA.”

Eichler Pomeroy owners say that the historicity of these cluster homes — they are two of legendary developer Joseph Eichler’s few multi-family housing developments — demands a CEQA review of the proposed construction.

The neighborhood group also says that the City didn’t follow its own general plan, zoning code and design guidelines in approving the project. Instead of keeping the mulit-family zoning, the City Council approved it as Planned Development (PD) — a designation, according to the Nov. 21, 2017 agenda report was “necessary to allow requested deviations from…development standards.” 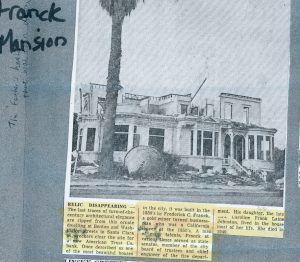 Part of the reason the City faces this lawsuit is that a majority of the Santa Clara City Council has consistently refused to consider mid-century modern tracts historic or to include them in the 2015 historic preservation ordinance.

At a January 2017 Council discussion about a tear-down project in the Maywood neighborhood, Council Member Patricia Mahan observed that the City’s Victorian houses — for example, the Franck Mansion (see photo) — “were being torn down when these houses were being built;” implying that the Council was faced with the same decisions as their forebears, but had an opportunity to make them more wisely.

“When we have a chance to preserve a neighborhood and its character, we should do that,” Mahan said. Mahan was one of the few Council Members who favored including Mid-Century Modern in the preservation ordinance.

The plaintiffs are represented by Susan Brandt-Hawley, an attorney well-known for her 30 years of CEQA and historic preservation litigation. You can read the complaint here: pomeroy eichler ceqa lawsuit 2019. To date, the City has not filed a response.

City Politics
Author Erika TownePosted on September 23, 2022September 26, 2022
Santa Clara’s Planning Commission tackled an application regarding signage at The Quad at Tasman during a short meeting on Sept. 21. The applicant, represented...

City Politics
Author Carolyn SchukPosted on September 21, 2022September 27, 2022
Santa Clara Mayor Lisa Gillmor is under new scrutiny this morning after she, ironically, asked Governor Gavin Newsom to weigh in on a public...
SPONSORED