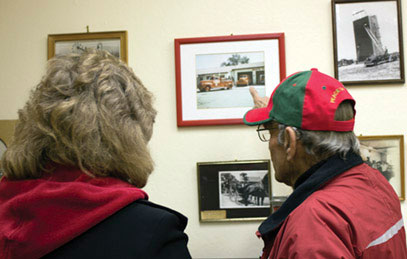 There is over 150 years of history within its walls. From the early volunteer days all the way through a recent incident at the 7-11 on Benton Street, the entire history of the Santa Clara Fire Department his chronicled, and on Dec. 6, the long-awaited Santa Clara Fire Museum opened its doors to the public for the first time.

“Our fire museum has been 155 years in the making,” said Fire Chief Bill Kelly. “It’s more than just a museum, it’s a showcase for the history of Santa Clara. Santa Clara has a rich history, as you know from our other museums here in town…This museum, however, shows you the history of Santa Clara through the eyes of the firefighters so it’s a little bit different. You’ll see some documents that were produced in the 1850s all the way up through today.” 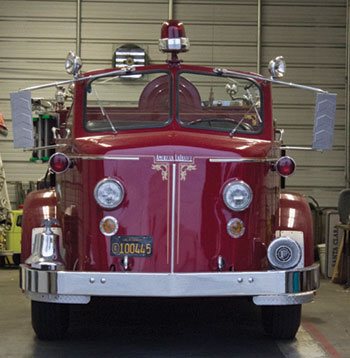 The museum is full artifacts and memorabilia as well as stunning photography from Craig Allyn Rose. Among the items on display is a 1913 Seagraves Chemical wagon, Santa Clara Fire Department’s first motorized vehicle, and the first leather helmet used by firefighters within the city. One of the most interesting pieces, however, is a lump of metal salvaged from the 1981 Mayfair Fire – the largest fire in the history of Santa Clara.

“This guy I worked with during my probation, his name is Don Campbell, [fought that fire,]” said Doug Gross who started with SCFD in 1969. “The fire had been burning for about two hours and it was a three-story building. The fire was where the basement was at and it was smoldering. So what they decided to do was get a crew to go down this ladder into the basement to go find the fire and start extinguishing it. So they took this ladder and they stuck it down [into the basement]…Well Don was getting ready to go down there with his crew and he went to go get his air pack. And just as he stepped forward to go down there, there was a funny hiccup with his air pack. He turned around to check his air pack and the fire flashed in the basement. It came out of the hole right behind him. He turned around and by the time he realized what was going on, that was the ladder on the ground that they found [after the fire was over].”

The museum opening also served as a bit of a homecoming for other former firefighters, like Ray Gamma, who started with the department in 1955. Gamma told stories that accompanied photographs and reminisced about his time working for Santa Clara.

“I drove that truck – the 1952 GMC – the first day I came to work,” said Gamma, gesturing to photo on the wall. “They got me my helmet and we had to buy our turnouts and [the captain] said, ‘you’re driving that truck.’ We had three calls that day.”

Everyone in attendance, including Council Members Debi Davis, Lisa Gillmor, Pat Mahan, Jerry Marsalli and Vice Mayor Pat Kolstad, whose wife worked for the fire department, were impressed with the museum and couldn’t be happier than the department’s history will be preserved for future generations.

The Santa Clara Fire Museum is at 1900 Walsh Ave. (behind Fire Station 2) and operated by the non-profit Saint Clare Hook and Ladder Society. Visit http://santaclarafiremuseum.org/ for more information.