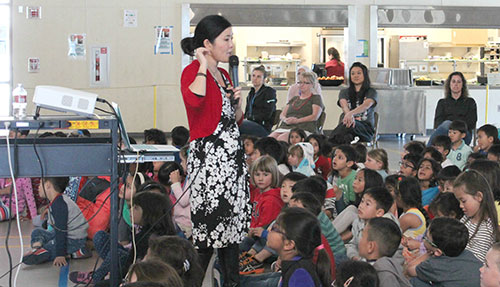 During her presentation at Don Callejon School on March 28, author and illustrator Kathryn Otoshi told students that no one else has the same hands as they do. She praised hands for what they can do and added that if one’s hands do something meaningful, they can also touch someone’s heart. This pleasant thought comes from one of Otoshi’s picture books co-authored with Bret Baumgarten called “Beautiful Hands.”

“Thanks to DCSCO (Don Callejon School Community Organization) for giving our students the opportunity to meet Kathryn,” said Michelle Taylor, librarian at Don Callejon School. “Author visits are always inspiring for our students who are budding writers and illustrators. I liked how Kathryn was very interactive with the kids.”

Otoshi’s popular picture book “One” is currently part of the curriculum for Project Cornerstone, an anti-bullying and character development program implemented at many Silicon Valley schools, including Don Callejon School. In “One,” Red bullied Blue as other colors stood by. Then One entered the scene and stood up to Red. Inspired by One’s assertiveness, the other colors, including Blue, transformed into numbers to show that they “counted.” Red began rolling away but was invited to remain in the group and hence, Red became a number and showed that everyone “counted.” Otoshi revealed that Red’s integration into the group wasn’t part of the initial ending she’d planned, where Red simply rolled away.

Otoshi also discussed a few of her other books, including “Zero” (Zero struggles with having no value), “Two” (Two loses One’s friendship to Three) and coming in the Fall, “Draw the Line” (Two boys connect and disconnect through their drawn lines). Character development and forming community are common themes in some of Otoshi’s work.