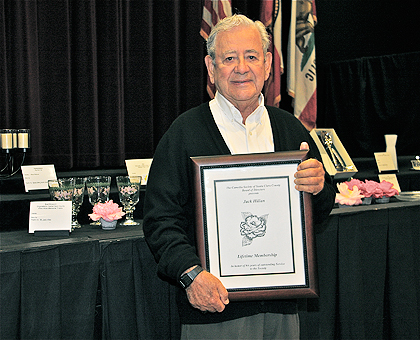 “Why camellias?” I asked at the 70th Camellia Show and Plant Sale sponsored by the Camellia Society of Santa Clara County, February 26 and 27, at the Santa Clara Community Recreation Center. Why not roses? Why not orchids?

One unexpected answer was serendipity—a chance encounter that led to a life-long love affair with camellias. “Family tradition” was another common response. And for some partners, it was a case of “love me, love my camellias.”

“My dad was given a camellia plant and liked it so much he eventually became president of the Sacramento Camellia Society,” says Carol Schanz, current president of that group. “He even created and named a camellia “Betsy,” after my mom.” Eight different camellia societies from the Bay Area and beyond turned out to help at the free show, co-sponsored by the City.

“Shows are the culmination of all your work—showing off,” says John Mendoza III, president of the 35-member Camellia Society of Santa Clara County and City arborist. This year’s show was dedicated to member Jack Hillian for his service to the society. Hillian was given a plaque and life-time membership.

Thirty-one judges teamed to evaluate 1,800 show entries, down this year because rain spotted flowers and cold weather delayed bud openings. Also, the show was in competition with the American Camellia Society’s spring convention in Georgia, which drew away some California growers.

Out of about 40 awards, the show sweepstakes winner, taking the most blue ribbons, was an entry by growers Don and Joan Lesmeister.

“It’s exquisite. It’s a very large, formal double with a beautiful bud center,” says show co-chair Bill Allman. “Its colors are exactly as they should be—just as when originally propagated,” he explains, admiring the white, “Junior Prom” camellia.

Judging the entries was no easy task. Society members say that northern California camellia growers produce flowers that win trophies all over the country. They are some of the top growers in the world.

“I don’t know what the magic is,” says Schanz, “but part of it may be how much growers are investing in time and energy.” Credit is also given to the northern California climate.

“We come every year because we love camellias,” says Santa Claran Dorothy Vares, admiring the many shades of pink and white. “We have two plants that came with our house when we bought it. When you walk up the sidewalk, it’s just so pretty. You don’t have to take such good care of them, but they still bloom every year.”

“People think that because they’re delicate looking, camellias must be hard to grow, but they’re not,” says Mendoza. His father, John Mendoza, Jr., was a camellia hobbyist in Santa Clara, and Mendoza recalls helping him plant camellias when he was just five. Now Mendoza shares the family hobby with his adult son, John Mendoza IV.

“If you really want to know how to grow a flower, the place to go is your local society that sponsors that kind of plant. They’re the ones with experts, and there’s a club for every flower,” advises Phillipa Alvis, Santa Clara County society secretary.

“My wife, Ruth, doted on camellias. She bought them, and I potted and planted them,” says Bob Marcy, society treasurer and show co-chair.

“She passed away, so now I′m taking care of them,” he says, sharing one of many camellia love stories told at the 70th Camellia Society of Santa Clara County Flower Show.