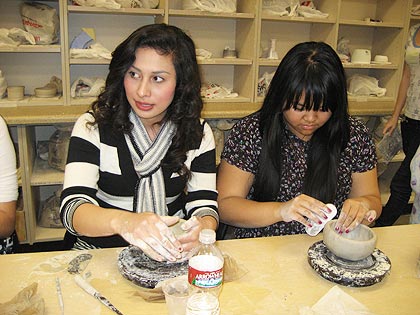 The $6.2 million renovation was funded thanks to Santa Clara voters who in the November 2004 election approved SCUSD measure J, authorizing $315 million in general obligation bonds for middle and secondary school expansion, modernization, and improvements. The electives wing renovation is but one part of a master plan underway to upgrade Santa Clara schools (www.santaclarausd.org).

The original wing was built in 1960 when ground was first broken for Wilcox High School, 3250 Monroe Avenue. The wing’s energy-efficient modernization was begun in June 2010 and completed that year. It included hazardous materials abatement; installation of new electrical, heating, and air conditioning systems; addition of audio-visual systems; and seismic upgrades.

“The students are full of pride about their program and the renovated building,” says Wilcox principal Bonnie Billings to the small crowd gathered for opening remarks at the Mission City Theater adjacent to the school.

“The renovation has been like turning an old Chevy into a BMW,” says Larry Adams, director of school bond projects. The design process was a collaboration with input from teachers, the Career Technical Education (CTE) advisory board, the bond oversight committee, and the professional design team.

Most classes in the wing are part of the CTE program at Wilcox. Some are articulated with local community colleges, enabling students to earn college credit as they earn high school elective credits.

Volunteers from Wilcox’s 2,000 students, led tours of the wing, which opened for classes in January, and demonstrated class activities. Culinary arts students, guided by teacher Daniel Arias, had worked over the prior weekend preparing hors d’oeuvres and finger desserts in their new industrial kitchen.

“This is the French Laundry of school kitchens,” says school superintendant Steve Stavis, referring to the only three-star 2010 Michelin Guide restaurant in the Bay Area.

“I can’t imagine being in a better place to teach video production. There is even the addition of a sound-proof recording studio,” says digital media teacher Tony Raffetto. “Teachers were involved every step of the way with planning.”

Digital media students Elijah, Nick, and Matthew showed off their menu designs for the Creekside Cafe, where the culinary arts students offer lunch on Fridays. Chef Arias will choose a winning design from the close to fifty student entries in the menu design contest.

Pottery students made clay bowls to be donated to the Empty Bowls Project (www.emptybowls.com) for a soup supper benefitting homeless services in Santa Clara County. The jazz band, led by teacher Rick South, practiced in an acoustically-designed and engineered music room.

In the small engines room, Madison, one of the few girls in the automotive technology program, gave a lively overview of her “really fun class.” Other students worked on cars.

“The auto and metal shop pretty much kept me in school,” says Keith Zimbauer, a Wilcox graduate who went on to complete an auto program at De Anza College and earn a B.S. degree in Vocational Education at Sacramento State University. After teaching auto shop a few years, Zimbauer opened his own auto and metal shop.

“What is taught in vocational classes is guaranteed to have value. Students will use the knowledge the rest of their lives,” says superintendant Stavis.

Share your Perspective on what SCUSD needs in a new Superintendent