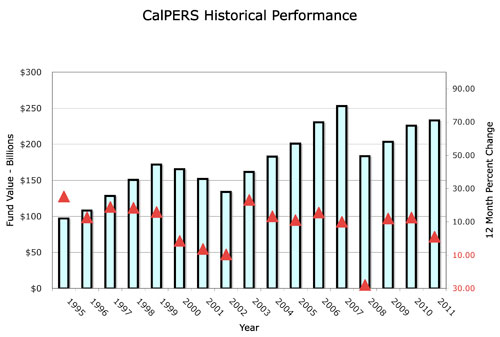 The next catastrophe to wallop municipal budgets will be a shortfall in CalPERS returns, adding to the already-escalating payments levied by the California public employees retirement fund on participating agencies.

On the other hand, if you average just the last five years of returns, CalPERS’ average rate of return comes in at 1.6 percent. And that might just point toward a new “normal” that’s not the 7.7 percent CalPERS has been using for its forecasting. “These are alarming financial results that threaten our budget stability,” noted City Council candidate Teresa O’Neill at the July 23 Citizens Advisory Committee (CAC) meeting.

So maybe the question municipalities and taxpayers should be asking is: If we’re on the hook if CalPERS fails to earn its predicted returns, shouldn’t we get a refund during those years when it beats expectations?

As this goes to press, the City of Sunnyvale is conducting a special public meeting with a CalPERS representative, Understanding the City’s Pension Obligations. Video is available at sunnyvale.ca.gov.

“It would be great to have Santa Clara invite someone from CalPERS, knowledgeable in our city’s account, to discuss this issue with us,” observed City Council candidate Jerry Marsalli the CAC’s July meeting.

Santa Clara’s Citizens Advisory Committee plans to be looking at CalPERS’ financials in the upcoming months, with an eye to how the fund’s performance and policies will affect the city’s budget in coming years. The CAC meets the first Monday of every month at the City Council Chambers. For more information, visit cacofsc.org.