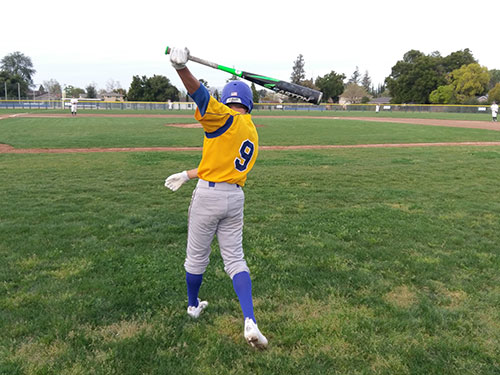 After just half an inning of play, the Santa Clara Bruins baseball team (2-2 in league) looked far prettier than the gloomy overcast weather on Thursday afternoon at Lynbrook High School. The Bruins batted through their lineup in the top half of the first, scoring four times against Vikings starting pitcher Johnnie Teng. Santa Clara shortstop Nick Helstrup batted twice in the inning, leading off the game with a double to left-center field. Third-baseman Tyler Kennedy would later notch an RBI single in an opening frame where three additional runs were gifted home by the Vikings. Two bases-loaded walks and a run on a throwing error by the shortstop combined to give the Bruins an early 4-0 lead.

While Lynbrook (3-3 in league) would respond with a run of their own in the bottom of the first inning, the game remained 4-1 until the bottom of the fourth. With two outs recorded and runners at first and third, Bruins starting pitcher Kyle Young had to be relieved due to pitch count rules. High school pitchers are only allowed to throw 110 pitches in a week and Young had already thrown 40 pitches in Tuesday’s home game against Lynbrook, (a 5-2 Bruins win).

“Kyle has always been a solid pitcher for us,” commented fellow senior pitcher Brandon Mungaray. “I’ve played with him since sophomore year and he’s always been a solid arm. He’s able to labor through full games. He had a complete game against Fremont two games ago. He’s probably the ace of our staff.”

Young wasn’t particularly sharp that afternoon, but the Bruins southpaw limited the damage in his time on the mound. In the third inning, Young walked the first two hitters, but managed to get out of the jam unscathed. When he left the mound, that’s where things unravelled for the Bruins.

The first batter after the pitching change rolled a weak ground ball to shortstop that should have ended the inning. Unfortunately for Santa Clara, Helstrup bobbled the ball and all runners were safe with a run coming into score to make it 4-2. The following batter blooped an RBI single into left center to make it 4-3 and then the next batter walked to load the bases. Another bloop hit into right center would plate a pair of runs as the Vikings took a 5-4 lead. With runners now at the corners, the Vikings attempted a double steal and it worked. The throw was sent short of second base in an attempt to get the out at home, but the return throw was too late and the fifth run of the inning scored.

“I think once we got a big lead early, we just kind of died down, lost our energy,” commented Bruins Head Coach Sean Grizzle. “Then they got some momentum and took advantage of our errors.”

While he didn’t figure in on the first inning rally, senior center fielder Pako Vehikite did all he could to get the Bruins back in the game. Immediately following the bottom of the fourth fiasco, Vehikite led off the top of the fifth by working a full-count before earning the walk. He then stole second base with still nobody out. Unfortunately for the Bruins, their next three batters all made weak contact, stranding Vehikite at second base. Trailing 7-4 in the top of the seventh, Vehikite also smoked a two-out single into left-center field to keep hopes alive, but he would once again be left stranded.

“Pako is definitely a stud on this team, he’s our three hitter,” added Mungaray. “If he really squares up a ball, he can definitely hit it a long way. He’s just really athletic, he can go out make a diving catch, get a base hit. He usually comes through when we need him, one of the best players on our team.”

Bruins Claw Back Twice, But lose 7-5 to Homestead