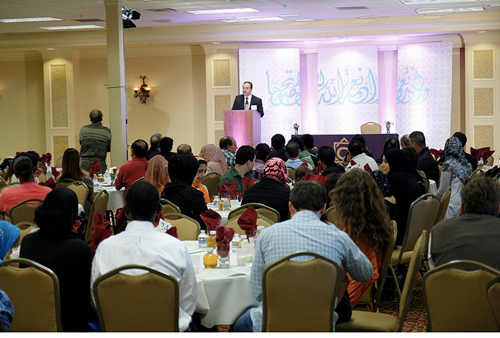 After more than 10 years as an annual event, it’s fair to say the annual Ramadan Open House held at the Santa Clara-based Muslim Community Association of the South Bay has joined these as a Santa Clara tradition.

This year’s open house on July 28 drew over 300 people to share iftar – the traditional meal breaking the Ramadan fast at sunset – and fellowship with their Muslim neighbors. Dinner featured Middle Eastern specialties from a Northside Santa Clara eatery that deserves to be better known, Holy Land Foods (www.holylandfoods.com).

“Every time the MCA has opened up their doors, they’ve opened up hearts,” said Santa Clara Mayor Jamie Matthews.

“Ramadan reconnects us with our humanity…we [fast] to strengthen our spirit,” said keynote speaker Imam Zaid Shakir. “We’re getting in touch with our spirit, our heart. And when we see with our heart we see how important it is to build inclusivity, not exclusivity. When we see with the heart we see the importance of extending the hand of brotherhood…and transcending ‘otherness’ and embracing ‘brotherness.'”

A Berkeley native widely regarded as one of the leading Muslim scholars in the west, Zaid has been called a formative influence in American Islam. Attesting to his intellectual heft, Shakir is one of the founders of two-year old Zaytuna College in Berkeley, which aims to become the first fully, accredited Muslim liberal arts college. With degrees from American University and Rutgers, Shakir is also an Air Force veteran, and author of an essay collection, Scattered Pictures: Reflections Of An American Muslim.

Shakir is known for the uniquely American-ness of his commentary and July 28 was no exception.

“Our country faces big challenges,” he said at the open house. “And these challenges will only be met by people who dare to look with the vision of their hearts.” People of good will, he said, who can “come together as a people dedicated to the promise of America, the promise of a more perfect union. May this gathering be a step in that process.”

The American Muslim Voice Foundation invites folks to join them at an Eid al-Fitr – Festival of Breaking the Fast – brunch on August 19. Visit www.amuslimvoice.org, email chowdhry94@hotmail.com, or call (650) 387-1994 for information.

The Muslim Community Association is at 3003 Scott Blvd. in Santa Clara. The MCA has other open houses in the works for October and April 2013. Visitors are always welcome and a mosque tour is held alternate Friday afternoons and includes lunch. For more information, visit www.mcabayarea.org, or call (408) 727-7277 ext 402.