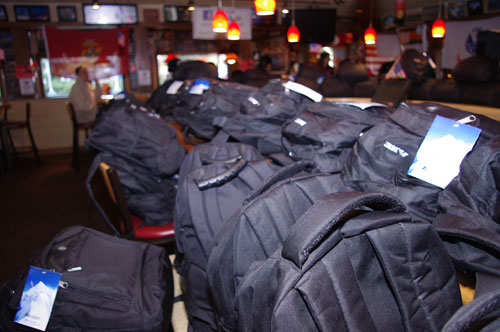 The South Bay Blue Star Moms teamed with Texas Instruments in Santa Clara to host a pancake breakfast for 43 homeless veterans November 10. The breakfast was held at Applebee’s, 51 Curtner Avenue, San Jose, which is a ten-minute walk from the EHC LifeBuilders Boccardo Regional Reception Center in San Jose, where the veterans receive social services and shelter.

“I want to thank Texas Instruments and the South Bay Blue Star Moms for hosting this wonderful event today at Applebee’s. We have a great group of veterans and thanking them for their service means a lot to them,” says Liz Griswold, event coordinator at EHC LifeBuilders (www.ehclifebuilders.org).

“When I returned to the shelter, the guys were sharing the details of the event with others. One of the veterans told me it felt really good knowing people do appreciate that he served his country,” says Griswold.

“Spending a few minutes listening to stories and thanking a veteran for their service is not hard, yet is so well received,” says Bonnie Estrada, software systems engineer at Texas Instruments and a member of the Board of South Bay Blue Star Moms, which is a support group for the troops and their families (www.southbaybluestarmoms.org).

Estrada, who spearheaded the breakfast, recently learned that her son, a Bronze Star recipient who served in Iraq, has re-enlisted in the Army Reserves.

“My son has a family that supports his decision [to re-enlist] and praises his bravery. It’s sad to think there are people who don’t have the same support, and I would only hope, if something ever happened to me, that his sacrifice would not be forgotten,” says Estrada.

Zeke Harvey, a Texas Instruments regional sales manager and a veteran himself, was one of the breakfast volunteers.

“I spent time visiting with Shaun, a former member of the U.S. Army.  He was an infantryman in the 1-82 Airborne in North Carolina. We talked about similarities between his experiences in the military and mine. I have the impression that he served [our] country with integrity and honor.  He still speaks highly of making a difference during his time in the military,” says Harvey.

“As Americans, we enjoy the privilege of freedom, but we rarely take time to remember that it comes at the expense of service members who fight to protect this and other rights. The pancake breakfast is an opportunity to remember and say ‘thank you’ with one of my most valued possessions—time.

As a veteran myself, I feel really good when someone shows appreciation for my service. I hope that the veterans at our event left with the same good feeling,” says Harvey.

As in past years, Texas Instruments (www.ti.com), which is a global semiconductor design and manufacturing company, provided the funding and joined the South Bay Blue Star Moms for this 4th annual event to honor homeless veterans.