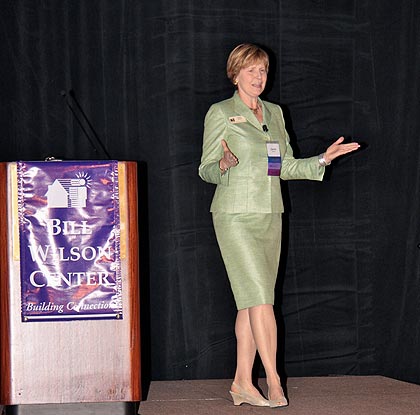 In 1977 the Bill Wilson Center (BWC) opened its first shelter for homeless and runaway teenagers. Now those services are needed more than ever, explained BWC Executive Director Sparky Harlan to an audience of 700 at the non-profit’s annual “Building Dreams” fundraiser last month. The event netted $200,000 for the Santa Clara-based 38 year-old social services agency.

“The number of kids in foster care and juvenile hall is dropping, but the number of homeless is growing,” said Harlan. “We expanded our drop-in center to 24 hours with staff hired from the homeless population it serves.”

“Bill Wilson Center consistently beats the national average,” she continued. That success, is due to best practices, a ‘no fail’ policy, and, more importantly, “that we make connections with the people we serve.”

One of those success stories is BWC Manager of transitional housing, Vanessa Payne, who painted a grim picture of her early life with methamphetamine-addicted parents, living in a trailer without electricity or running water until the family became homeless. At 12, Payne was put in a group home and, over the next six years, lived in 17 different foster and group homes.

“I felt I was being punished for talking to the police,” she said. “I had opportunity to become involved with Bill Wilson Center.” But opportunity came to nothing, when she unsuccessfully tried to reunite with her mother.

“I turned 18 in the foster care system,” Payne told the audience. “When you don’t have a family, you don’t know how to manage your own life. Maybe if I had a doctor for a father I would have grown up to be a doctor. I started to become what my parents were.” That meant methamphetamine addiction, two felony convictions and a jail term.

Payne’s turnaround came after discovering she was pregnant. “I didn’t want my son to have all the hopes and dreams taken away from him [as I had]. And when I wanted to change, I knew where to go: Bill Wilson Center. When I came back, [because of] their no-fail policy, they welcomed me with open arms. Bill Wilson Center said: we believe in you.”

She and her infant found a sanctuary in BWC’s transitional housing program for young adults. Payne started college when her son was three months old, spending the rainy first day of school shivering in wet clothes after a long bus ride. She went on to earn a BS in Behavioral Psychology and now manages the transitional housing program she once lived in. “It doesn’t take much to change someone’s life,” she told listeners. “I was completely competent to do the work. I just needed a hand.”

“Our drop-in center could be cut to eight hours. Shelter beds could be cut. But,” continued Harlan, who has shown herself in the past to be a formidable advocate for BWC clients, “I think there’s an opportunity here. We can make homeless youth a priority, together. I believe we will outplay, outlive and outlast this recession.”

Founded in 1973, the non-profit Bill Wilson Center serves youth and families through counseling, housing, education, and advocacy. The agency assists over 10,000 clients in Santa Clara County each year. By emphasizing building self-confidence and life skills, BWC helps its young clients permanently change the direction of their lives. Now the non-profit is getting ready to open its groundbreaking transitional housing for young adults, Peacock Court in Santa Clara.

For more information, visit www.billwilsoncenter.org or call (408) 243-0222. Visit BWC’s YouTube channel – www.youtube.com/watch?v=33ihNtRUZ0Q – for video of the agency’s projects and events.

Here’s what supporters of the Bill Wilson Center get for their donations: