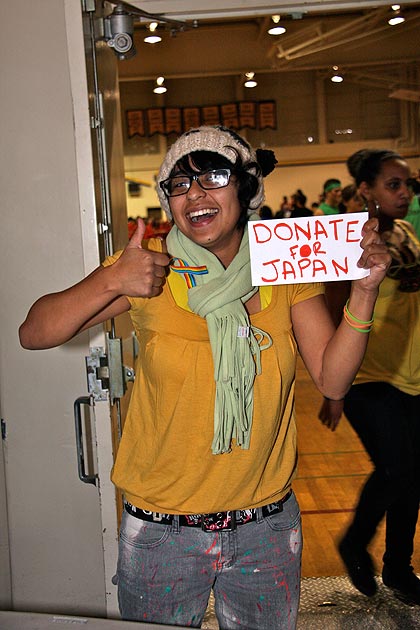 Following Japan’s devastating earthquake and tsunami, Santa Clara High School students were quick to respond with help. The students launched the “We Love Japan Club” and are selling red and white “Love Japan Love the World” bracelets to raise money for relief efforts. The effort began small at SCHS during lunch break and at school events.

Now this wonderfully simple idea has grown beyond the students’ wildest dreams.

Through the efforts of SCHS students Jessica and Rebecca Lai, the club is joining forces with Santa Clara Sister Cities Association (SCA), which this week celebrates a quarter-century relationship with Izumo, Japan. The Lai sisters are SCA members and are hosting two Japanese students this week. They will visit Japan in July as part of a SCA delegation.

The SCA is collecting donations to help the village of Minamisanriku in Miyagi prefecture, one of the hardest hit in the disaster. The earthquake and tsunami leveled 95 percent of Minamisanriku and over 9,000 people remain missing.

Tom Kuwabara, past President of Izumo’s International Exchange Association, will be on hand to accept the donations at the SCA’s potluck on March 27. When he returns home, he’ll deliver the money to Minamisanriku’s mayor.

“This year is our 25th Anniversary of our Sister City relationship with Izumo and they will still be visiting their beloved Santa Clara in the mist of this tragedy they face in their country,” said SCA President Debi Davis in an email. “SCA has been committed to our relationship and feels this is a way to give hope to another village in Japan.”

The Sister City’s potluck is Sunday, March 27, 2011at 5:00 p.m. at the Santa Clara Senior Center and the community is welcome. Please RSVP Debi Davis at debid56@comcast.net or call her at (408) 687-0331. For information visit www.santaclarasistercities.org. You can mail donations for Japanese relief to Santa Clara Sister Cities Association, P.O. Box 3425, Santa Clara 95055-3425.

Schools
Author Cynthia ChengPosted on May 25, 2011
Craig Young, a science teacher at Wilcox High School, knows that learning science is more than just memorizing facts and applying formulas. “The most...

Schools
Author Cynthia ChengPosted on May 30, 2018
Adela Trinh, 17, had to get the “reddish greyish blueish plaid fabric” at Fabrics R Us that screamed for her attention. She went on...