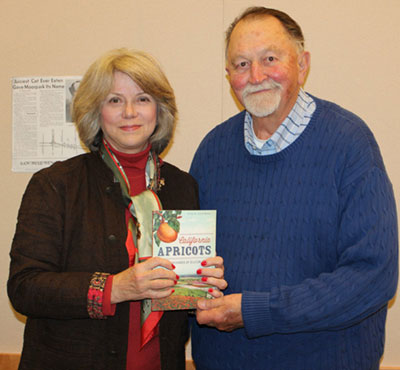 Picture fruit orchards scattered along El Camino Real. The image might sound surreal, but this landscape is part of Santa Clara Valley’s history. Such a black and white photograph taken during the late 1940s was shown at Central Park Library’s book talk given by author and former KRON-TV news anchor and reporter Robin Chapman on October 28. Chapman’s history book, “California Apricots: The Lost Orchards of Silicon Valley,” explores the agricultural history of the valley.

“History is important because we need to know where we’ve been in order to secure a better place for ourselves in the future,” Chapman says.

During the talk, Chapman reminisced about her childhood growing up in Los Altos. She remembered performing the labor of “cutting ‘cots,” which involves using a knife to split an apricot by the seam, extracting the seed, and setting the fruit on wooden trays so the core of the fruit faces the sun. This process dries and preserves apricots.

“When you cut ‘cots, the juice gets all over you, and then there’s the [perfume],” says Chapman, who relished the heavenly scent.

Chapman is very knowledgeable about the history of the agricultural landscape in Santa Clara Valley. According to Chapman, apricot trees were spotted in Mission Santa Clara as early as 1802. The Los Altos Civic Center Orchard was there when the city was established in 1952. Sunnyvale and Saratoga established their heritage orchards later on.

Chapman believes people’s interest in the slow food movement has helped the fruitful book sales of “California Apricots,” currently in its third printing.

“California is always on the edge of new things, and the new things are localtarianism and the slow food movement, which is the opposite of fast food,” Chapman says. “People now in Northern California are doing what we were doing years ago with food. [They ask] is it fresh? Is it local?”

An honored audience member was Kenneth Bruce, a former history teacher from Los Altos High School where Chapman was a student.

“Back in the days when dinosaurs ruled the earth, and I was a young man here in the Santa Clara Valley during the late 1940s, you could drive in the springtime on Blossom Hill Road, which overlooked the valley, and see a beautiful maze of blossoms,” Bruce says. “We had prunes, apricots, and other fruits.

“Robin was in my history class,” he recalls. “Sometimes students are like ‘who needs history,’ and I get them going. I give them a spark. There’s something in history for everybody. [Seeing Chapman promote her history book], makes me feel good. I feel I’ve done my job.”