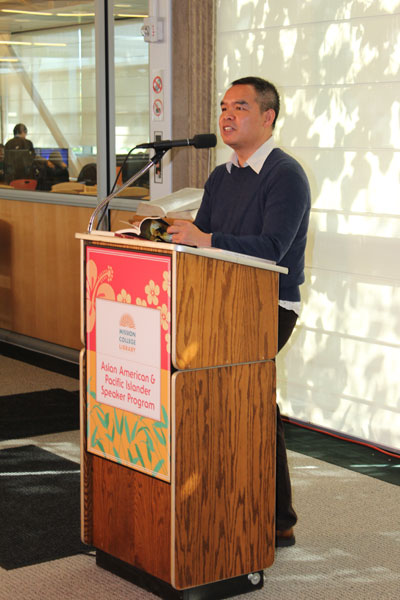 Shortly before the fall of Saigon in 1975, 11 year-old Andrew Lam fled Vietnam with his family. At an appearance at Mission College on October 22, Lam, now an award-winning author, recalls learning English as a young boy.

“When I first came to America, I thought English was so strange,” says Lam, who had only spoken Vietnamese and French up until his arrival. “When I went through puberty, my brother told me I sounded like a duck. He said that speaking English shattered my vocal chords. But I was enchanted by English then, and remain enchanted to this day.”

Lam began writing in college at U.C. Berkeley after experiencing his first heartbreak. A pre-med student, he caught the attention of his creative writing teacher who encouraged him to pursue a career in writing. Lam went on to earn a Master of Fine Arts in Creative Writing from San Francisco State University.

Telling his traditional Vietnamese parents he wanted to be a writer instead of a doctor wasn’t easy. Lam’s mother accused him of being a Berkeley hippie. His father challenged him to name any Vietnamese person in America making a living as a writer. To that Lam responded, “I’m going to be the first.”

An audience member asked Lam how he felt about “losing his country” when he and his family were forced to leave Vietnam.

“No one wants to lose their country or belong to the losing side,” Lam says. “Even if you suffer, you can find a way to remodel that suffering into esthetic expression. You can turn it into something positive.”

For Lam, this esthetic expression is channeled into his writing. His first book, “Perfume Dreams,” comprised of essays about the Vietnamese American experience. In his second book, “East Eats West,” Lam shares observations about globalization. At the talk, Lam read some short fiction about riding on public transportation in San Francisco, shared from his new collection of short stories, “Birds of Paradise Lost.”

Lam fundraises for the Pacific Links Foundation, an organization that fights human trafficking in Vietnam. According to Lam, some Vietnamese women have been kidnapped, lured away with job offers, or have even married false suitors. Once taken across the border to another country, victims sometimes end up trapped in brothels or factories.

“I think countries that allow this kind of transaction without providing any protection to its vulnerable population should be held accountable internationally,” Lam says.