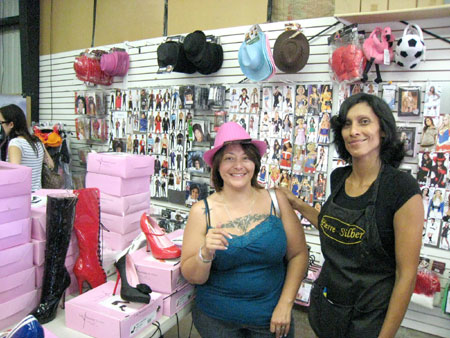 Want to show some skin in a fairy tale character, super hero, or occupational costume for Halloween? Check out Pierre Silber, a specialty shoe, lingerie, and costume store located at 2735 Scott Boulevard in Santa Clara. Right now, Pierre Silber’s Halloween store is open with many dressing rooms. Between now and October 10, in-store customers will receive 20% off any one costume or accessory when they mention this store promotion.

“We originated the full-service concept,” says Pierre Silber, owner of Pierre Silber. “At other [costume] stores, you’d have one dressing room only and you might end up changing in the aisles. At my store, we have women in the fitting rooms who will fit you with wigs and stockings and bras and shoes. Some women are too shy to come out with their costume to show to others, so we have a private viewing area where the husband or the boyfriend or girlfriend can see the costume and decide if the costume is right or not. When you come out of the dressing room, you’d be completely decked out.”

“We sell adult costumes, so we require that customers under 16 be accompanied by a parent,” Silber adds. “We want parents to approve of what their child picks out.”

Because October is also Breast Cancer Awareness Month, Silber mentions that his store carries items for women who have had mastectomies.

“For someone who has had breast cancer or if she’s very small on top, we carry all different sizes of prosthetic breasts,” Silber says. “We carry sizes all the way from size 0 to size 10 and they come in different skin tones. We have certain bras that are compatible with those breasts.”

“I always find that no matter how beautiful a woman is, she’s always self-conscious about something,” Silber continues. “At my store, we always try to make a woman feel good about herself.”

Silber was in the family shoe business when the lingerie business fell on his lap. He had once owned Santa Clara’s Orange Comfort Shoes on Homestead Road and the Sunnyvale Shoe Mart.

“[At the Sunnyvale Shoe Mart], a shoe manufacturer made this enormous six-inch heel shoe for me and he made it up into a size 14 shoe,” Silber says. “I asked the manufacturer to make the shoes smaller for the ladies. He sent me the shoes, and within a weeks’ time, they were all sold.”

Silber ordered more shoes, and people kept buying them. Then people asked him to carry lingerie and corsets to accompany those shoes. So when Silber started to carry the garments and saw how well those pieces were selling, he began growing the idea for a new business, which became Pierre Silber. According to Silber, women like coming to Pierre Silber with their girlfriends to pick out outfits for costume events.

The Dish: The Party Lives on at Pizza Party

CrossFit Takes Fitness Back to Basics

Business Community
Author Erika TownePosted on September 21, 2022
“It means a lot for me to get on a plane. I don’t like to fly,” said Denise Coklow, President of DeMar Promotional Marketing...

Business Community
Author Carolyn SchukPosted on September 18, 2022
In late 1937 a small item in a Santa Clara newspaper announced that W.A. Wahl, Standard Oil agent for Santa Clara, was elected the...

Business Community
Author Shawn ChongPosted on September 5, 2022
Santa Clara-based Legendary Tones is an information site focused on all things guitar. “We have a rock-oriented focus,” said founder David Szabados, who has...
SPONSORED