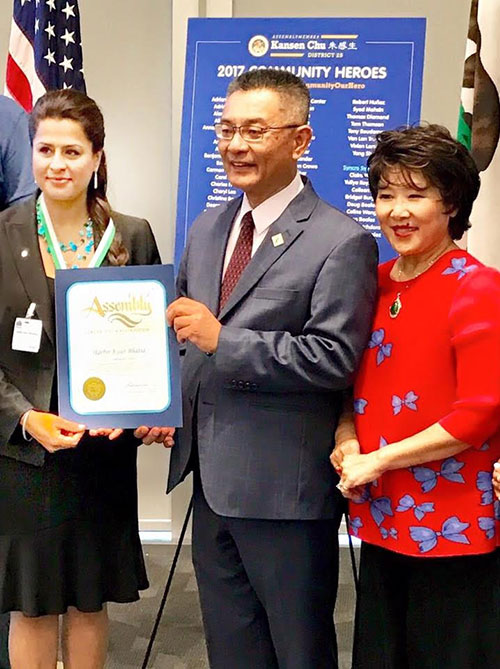 “This is a great opportunity to honor extraordinary individuals who have demonstrated outstanding public service while going above and beyond for our community,” Chu said in a press release.

Also employed with SCUSD and recognized as a Community Hero was Kristina Wilmot, a special education teacher at Braly Elementary School. (Wilmot was unable to attend the ceremony.)

“I give individualized assignments for everyone; some of my students are just working on what a letter is and some of them are reading,” said Wilmot, who has taught special education in grades K to 5. “I’ve made some books where you can move words around to build sentences to learn beginning reading skills. I also work on language development. I enjoy seeing a student coming out of their shell. When a student comes in only knowing a few words and then at the end of the school year, they can say ‘hi’ to me and say ‘good-bye’ independently to their families, and they can describe how they’re feeling and how they’re doing, that is what I consider an accomplishment.”

“From January to the 15th of April, I volunteer 25 hours a week as the local coordinator and I also work with tax issues year-round,” said Pivacek, who has career experience doing accounting work and payroll processing. “For example, I might work with someone who gets a letter from the IRS when there’s a problem. I have prepared taxes and e-filed taxes for many people in the Santa Clara community as well as those who don’t live in Santa Clara. This year, our team worked on over 1,000 tax returns free of charge.”

Honoree Harbir Kaur Bhatia works part-time at MKF (Menina Kaj Femme, referring to Girls and Women) and devotes the rest of her time to community service. She has organized events to recognize Sikh Awareness and Appreciation Month, has helped raise money for the Red Cross, plans Commemorative Month Series events as a Santa Clara Cultural Commissioner, and will serve as the vice president for the board of the Santa Clara City Library Foundation in July. Bhatia also started ooNee Studios to recognize the achievements of accomplished people.

“[ooNee Studios] was launched to give a voice to unsung heroes in the areas of entrepreneurship, community transformation, inspirational heroes that have achieved a lot with very little,” Bhatia said. “We’ve been doing this for four to five years. We haven’t been about promoting the company but are about promoting the subject–it could be anyone from a Red Cross hero to a start up.”

Another honoree was Cheryl Lee, Northside Library’s branch manager and program coordinator. Attending the ceremony with her family, Hilary Keith, director of the Santa Clara City Library, and Lee Broughman, library board member. Cheryl Lee credited her staff at Northside Library for her award and called them her community heroes.

“We’ve helped so many people advance their careers; this is through our professional development programs such as interviewing skills, networking and our photography sessions for LinkedIn profile photos,” Lee said. “We’re turning unemployed people to being employed. That’s what we’re all about at the library. I know a woman who was born and raised in Santa Clara and she was struggling to get a full-time job for eight years. She changed her photo on LinkedIn after attending our LinkedIn photo session. She was contacted by a recruiter right after she posted her new photo and immediately hired for a full-time job in Sacramento.”