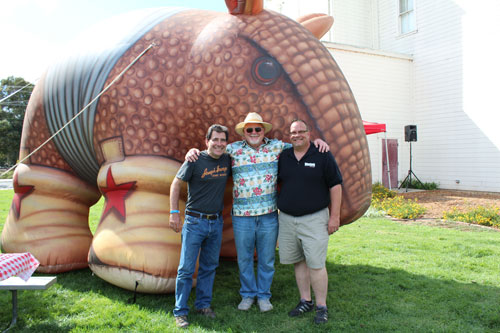 The Texas barbequed spare ribs were packed with flavor, the pit-smoked chicken was juicy and tender, and the grilled cilantro garlic bread was crispy and warm. A thick slice of chocolate birthday cake topped off Willy’s 30th Birthday BBQ Bash. The event marked Armadillo Willy’s three decades of success in the restaurant industry and the effort to fundraise for the Rotary Club of San Jose’s centennial project, a playground for individuals with special needs. About 250 people attended the birthday party and fundraiser, held at San Jose’s History Park on Sunday, October 6.

“We set up a crafts table [for the kids] with the History Museum,” says Tim Ford, director of operations for Armadillo Willy’s BBQ and member of the Rotary Club of Santa Clara. “We have a giant armadillo balloon blown up. And we have drink donations from Pepsi.”

John Berwald, founder of Armadillo Willy’s BBQ, ran a restaurant in Sunnyvale called St. John’s Bar & Grill back in the 1980s. The barbeque-themed nights the restaurant hosted were the busiest nights. Back then, the restaurant staff baked meat with barbeque sauce, in what Berwald refers to as “California style.”

“We decided we wanted to open a barbeque place so we flew to Texas, the epicenter of barbeque,” Berwald says. “We realized what we were doing was not authentic barbeque. So we found a manufacturer in Dallas that made wood- burning barbeque pits, an important part of barbequing that allows you to cook using the heat and smoke from a hardwood fire. That’s what we’ve been doing at our Armadillo Willy’s restaurants for the last 30 years. [We sometimes] cook the meat at low temperature for a long period of time. That’s Texas style. The brisket we’re serving today started cooking at 6 p.m. last night. It cooked for 16 hours.”

“Someone from the Rotary Club of San Jose told me about their 100th year project, which is to build the Rotary PlayGarden to accommodate children and adults with special needs; right now, there is nothing like this in our area,” Berwald continues. “One hundred percent of the proceeds from today’s barbeque and [more money from private donations] will go toward the building of the Rotary PlayGarden.”

Building the four-and-a-half acre Rotary PlayGarden in Guadalupe Park will cost about $6.5 million. Members of the Rotary Club of San Jose are grateful for the generosity of donors such as Armadillo Willy’s BBQ.

“Every piece of park equipment [can accommodate] kids who have special needs and those who don’t have special needs,” says Bert George, member of the Rotary Club of San Jose. “This park is also accessible to parents with special needs or parents in wheelchairs who want to take their child to the park.”

Shirley Lewis, former president of the Rotary Club of San Jose, points out various features of the Rotary PlayGarden on a visual plan. Construction on the park is planned for 2014.

“Here on this swing, a handicapped child can swing side by side with an able-bodied child,” Lewis says. “A wheelchair can go on this merry-go-round. Over here is a teeter-totter where an adult can sit behind a child to support them. And here is a ramp that allows wheelchairs to get up to the top of a slide.”