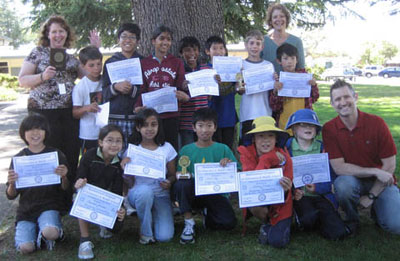 Are you smarter than a fifth grader at Ponderosa Elementary School? Or how about a fourth grader?

Can you solve this math problem in five minutes?

Clue 1: It is the same number if you read it from right to left.

Clue 2: The number is a multiple of nine.

Clue 3: Cross off the first and last digits. The only prime factor of the remaining four-digit number is 11.

What is Hannah’s six-digit number?

Ponderosa Elementary School’s 2011-2012 Math Olympiad team of 48 fourth and fifth graders earned a Math Olympiad Honor Roll Plaque for placing in the top 10 percent in an international math competition with 86,000, fourth through sixth graders. Ponderosa’s team was one of about 3,500 teams.

“This is an exceptional group of young mathematicians. They were very open to learning about new methods for solving problems and also sharing their own methods with others,” says fifth grade teacher and Math Olympiad advisor Shawn Murphy.

The Ponderosa math Olympians—21 girls and 27 boys—were invited to participate in the competition based on test scores and teacher recommendations. All received a certificate of participation. Thirty-three received badges for scoring in the top 50 percent internationally.

“I’m very proud to be principal of Ponderosa and work with the fourth and fifth grade teams. We want you to be mathematicians not only now but in the future,” says Principal Meg Jackson at the May 22 after-school awards ceremony honoring the math Olympians. “I appreciate the leadership of Mr. Murphy and parents.”

“My dad encouraged me to do the Math Olympiad, and I practiced before every competition,” says fifth grader Justin Vo. “I feel comfortable doing math. It’s like a universal language that everybody can understand.”

Vo and classmate Jack Kliewer received trophies for getting the highest scores on the Ponderosa team—23 out of 25 possible points.

“I was a little anxious at first, but it was fun in the end. We encouraged each other and helped each other through it,” says fifth grader Juliana Hartley. Her older brother, Christian, was the first Ponderosa math Olympian in her family.

The Math Olympiad took place October 2011- March 2012. Small study groups met one hour weekly, led by parent coaches (and one brother). Five monthly competitions were held at the school beginning in November. Each timed competition consisted of five high-level math problems valued at one point each. Volunteer parent Kathi Gibb handled the logistics of the competition, including scoring and tracking points.

This is the first time for Ponderosa Elementary School, which is in the Santa Clara Unified School District but located in Sunnyvale, to receive an honor roll plaque. It is its sixth year to participate in the Math Olympiad (www.moems.org).

The American game show, “Are You Smarter Than a 5th Grader?” challenges adults to answer questions based on content in first to fifth grade textbooks.

Schools
Author Erika TownePosted on May 8, 2020
Schools across the country have closed their campuses, quickly sending students into a new world based in distance learning. According to EAB, an education...

Schools
Author Atoosa SavarnejadPosted on May 2, 2018
“Don’t take away opportunity!” That was the resounding cry of half a dozen attendees at the Santa Clara Unified School District’s board meeting on...
SPONSORED