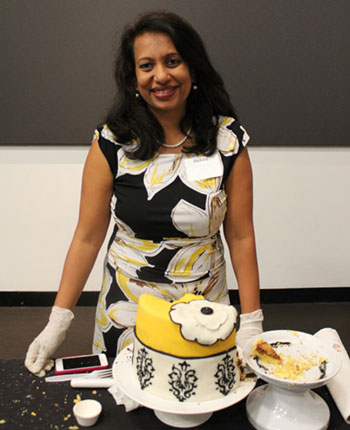 On September 14 at the Domain Hotel in Sunnyvale, about 50 bakers put their best cake forward at Cake-Off4Kids, a baking competition benefiting Cake4Kids. The non-profit organization matches volunteer bakers up with underserved and foster youth to donate birthday cakes.

“I saw a cake like this online,” says Jen Doyle,13, of an iPad cake she made with fondant featuring icons of commonly used apps. “This is a vanilla cake with strawberries and whipped cream.”

Clark Koskela,12, made an allergen-free spice cake with coconut glaze. The cake contained no gluten, dairy, egg, soy, or cane sugar, ingredients Koskela is allergic to.

“I’ve made a lot of spice cakes and it’s the cake I have the most experience with,” Koskela says. “[For the spices], I added some cinnamon and ginger.”

“This is a mango cake and I used fondant to decorate; the intricate damask motif, this stencil pattern, was done with buttercream,” says Kshama Swamy, who won first prize and $100 for the best decorated cake. “I am a self-taught baker. I learn by watching YouTube videos.” 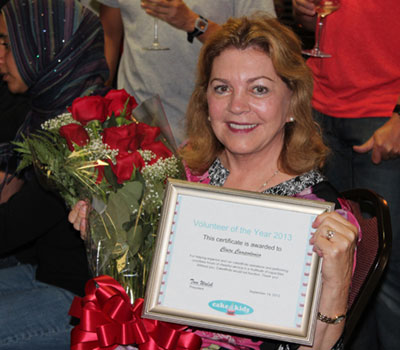 Cake-off guests also learned about Cake4Kids and recognized its volunteers. Winning the Volunteer of the Year award was Claire Campodonico, who baked 75 cakes for children in the last three years.

“We do 80 cakes a month. We serve the South Bay and East Bay combined, and we have 275 volunteers,” says Debbie Tryforos, a resident of Santa Clara who serves as an agency liason and volunteer coordinator for Cake4Kids. “Some of the children we serve have never had a birthday cake. Just knowing someone cared enough to make a cake for them, with their names put on, is important.”

“You don’t want a kid’s birthday to be forgotten,” adds Kate Krummel, also a resident of Santa Clara and an event planner for Cake4Kids. “The people I drop off the cakes to are always super appreciative.”

“This cake-off pulls together the community of amateur bakers starting from age five and onward,” says Melanie Gill, executive director of Cake4Kids. “The money [we raise tonight] goes toward running our organization and other programs.”

Email info@cake4kids.org for information about being a volunteer.