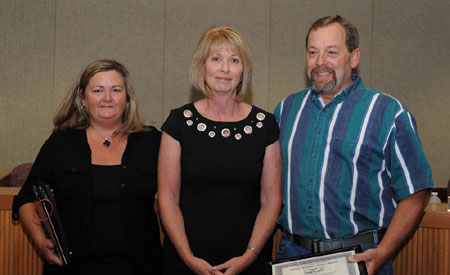 On April 13 and June 1, 2011, two Santa Clara Unified School District (SCUSD) employees accomplished something that most people, even though they might have received training to do so, never actually do. Their actions and quick thinking had a positive impact on the lives of not just two people but two entire families. By using the training they had received in CPR (Cardio Pulmonary Resuscitation), they were able to help save the lives of two victims of Sudden Cardiac Arrest. According to Santa Clara Fire Chief, Phil Kleinheinz, “A firefighter can go their entire career and never have a chance to save a life by using CPR.” This sentiment summed up the significane of the efforts of David Korfman and Susan Foster.

At the September 8 SCUSD School Board meeting, both Susan and David became recipients of Lifesaving Awards from three Bay Area organizations, in recognition of their efforts that helped to save the lives of people they had never met before. According to Tabitha Kappeler-Hurley, Public Information Officer for the SCUSD, “Both Korfman and Foster were trained in CPR and Automated External Defibrillators (AEDs) as part of the joint efforts of SCUSD and the Santa Clara Fire Department to certify more than 100 (employees) in CPR/AED use, orient over 1,200 district employees on how to use AEDs, and place over 69 AEDs throughout the school district since 2009…. Mr. Korfman and Ms. Foster applied their CPR/AED lifesaving training during non-work related events to increase the chances for the victim’s survival. In both cases, the victims have returned to their normal everyday life.”

Fire Chief Kleinheinz was joined by Deputy Fire Chief Augie Wiedemann, Deputy Chief Bill Kelly and Captain Rick Harsh in presenting both Korfman and Foster the department’s Life Saving Award. Additionally, the Fire Department recognized the SCUSD School Board for their partnership with the Fire Department.

Korfman and Foster were also recognized by the Sudden Cardiac Arrest Association (SCAA – www.suddencardiacarrest.org) and were invited to join the Eight Percent Club. The Eight Percent Club has earned its name because only eight percent of people who go into sudden cardiac arrest (SCA) outside of a hospital actually survive. The SCAA is a nation-wide, non-profit whose stated mission is “…to prevent loss of life from Sudden Cardiac Arrest.”

Finally, both received the Eileen Bowden Hero Award. This award was named after SCUSD School Nurse, Eileen Bowden, who died in 2009 after helping give CPR to a Santa Clara High School softball coach, who had suffered a heart attack.

AED/CPR Project Coordinator, Angie Scott, stated, “It’s amazing that a simple training has made such a tremendous difference in the lives of individuals out in our community. These employees went above and beyond their job duties and saved a person they didn’t even know. We are excited to honor their important efforts!” The Fire Department also presented Scott with a Distinguised Service Award for her efforts to acquire, install, maintain and provide training for AEDs on every campus/building in the District.