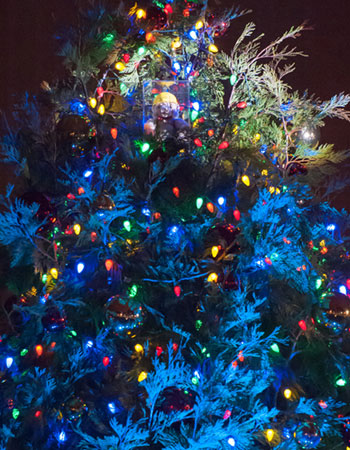 As the excitement rose and the line of children eagerly awaiting the arrival of the big guy grew, the wind picked up and seemed to push the temperatures even lower. But even with the temperatures hovering in the mid-40s, nothing was going to deter several hundred children in their quest to see Santa Claus at Santa Clara’s Annual Holiday Tree Lighting Ceremony.

But this year’s event was notably different from previous years. In addition to a new Santa Clara Holiday Tree, Santa arrived over an hour earlier. And he didn’t arrive in a fire truck. Molly Crawford, Miss Santa Clara 2013, had the pleasure of introducing him to the excited throngs of parents and children alike. “I’m so excited he’s here!” exclaimed a 6-year old Molly from Sunnyvale. “We are too,” added her parents Hector and Tatiana. “Molly’s been talking about this ever since we told her about it.”

While the children were busy excitedly taking turns telling Santa their holiday wishes, the attention of the evening was turned to the main stage, which offered a view of the new Santa Clara Holiday Tree. Crawford was emcee for the evening, and introduced the various dignitaries, including members of the City Council, the City Manager, and one of the most important players in the night’s affairs, 2013 Holiday Tree Lighter Tom Goodson. 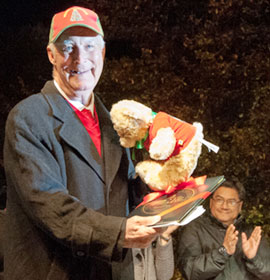 An active volunteer in the city since 1964, Goodson’s list of accomplishments would far overflow this space. Highlights of his service include active volunteering at Pomeroy Elementary School since 1976. He was inducted into the Santa Clara Unified School District’s Hall of Fame in 2011 for all of his years of service.

Keeping with past tradition, the Buchser Middle School Jazz Band and the Déjà vu Jazz Band, both led by David Ladd Anderson, kept the crowd entertained with some classical holiday and jazz tunes. Sally, a 9-year old from Santa Clara, commented, “Even though it’s really cold, the music is keeping me warm.” Her mother, Sarah agreed. “We first started coming just to see Santa, but over the past five years, we’ve all learned more about jazz and what a band can sound like. Sally’s already talking about what instrument she’d like to play and has hopes of one day being a member of the band too.”

The Santa Clara Parks and Recreation Department Dancers, led by Miss Linnea, performed a brief number, to the delight of everyone present. “I really enjoy seeing the dancers, and I know the event seemed to run a little long in the past, but I would have loved to see more of the dancers and less of the city dignitaries,” said one audience member when asked what she thought about the new format for the evening.

As in the past, there were Parks and Recreation Department information booths, food, and kettle corn and face painting by the Santa Clara Youth Commission.