No one is immune to racism, and the Bay Area’s multicultural population offers object lessons in multicultural racism, including anti-Asian racism among different ethnic groups who are all, broadly speaking, Asian.

Last week, Ryan Lin stopped for lunch at one of the many restaurants in Santa Clara’s Mercado shopping center, BurgerIM Burger Bar, a Southern California sports bar and burger chain. The Santa Clara franchise is owned by a San Jose company, VRSV One.

When he placed his order, Lin noticed an odd thing. The South Asian cashier wasn’t asking any of the customers for their names to identify their orders.

“There were 3 people waiting in front of me in line,” Lin said in an email. “I noticed that the cashier, named Abhi N, never asked for any of our names when taking our order.”

When Lin checked the receipt for an order number, “I also glanced at the word “Chinki” and wasn’t sure at the moment what that was referring to,” he said. 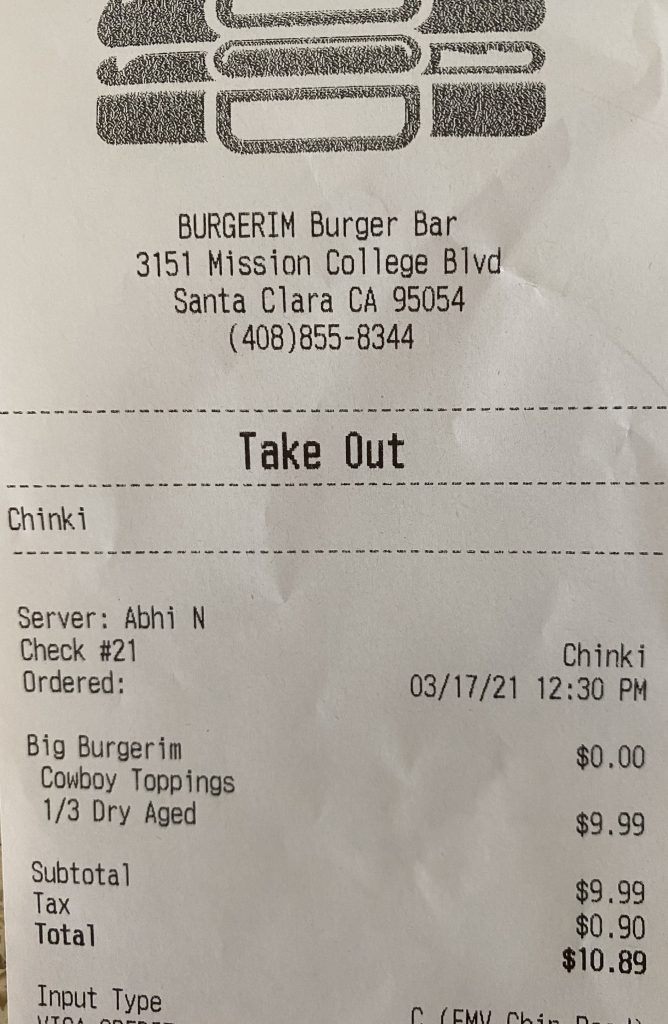 “It did sound suspiciously like ‘chink’ but without the “i” suffix, so I was giving the cashier benefit of the doubt that ‘Chinki’ was a typo or maybe it was a coincidental abbreviation of some other restaurant term.”

Lin didn’t think any more about it until he asked some Indian friends what “Chinki” meant in Hindi.

“All of them unequivocally responded that this was a derogatory word used in India to address anyone with East Asian features,” he said. “In fact, they said some Indians even discriminate against North East Indians because they have East Asian features even though they aren’t East Asian.”

Lin says he realized the cashier had written a racial slur his receipt, and he presumes others, to help differentiate each patron. “He didn’t bother with asking our real names,” Lin adds.

Lin posted this on a Yelp review, including the word “chinki,” which resulted in his review being removed for violating the site’s terms of use.

He tried a second post with just a picture of the receipt, which got more than 800 “useful” clicks. This caused Yelp to post a Public Attention Alert and block new posts about BurgerIM, while Yelp works “to investigate the content.”

This was the first time Lin had been to the restaurant, and he doesn’t know anyone who else who had a bad experience there. “I suppose most people just throw out their receipt without carefully reading it,” he said.

Mohammad says that the normal procedure is to take customers’ names. But he said that during busy times that names could be misunderstood and misspelled. This was one such mistake, he said.

“We have never had this type of issue, it went in the wrong way,” he said. “From the bottom of my heart I’m saying no one meant anything in that [a racist] way.”

Lin, however doesn’t accept this as a mistake.

“The cashier did not make a mistake,” Lin said.

“It was an intentional attack. I cross-referenced this with three Indian friends that grew up in India. They all say ‘Chinki’ is unequivocally racist. It’s even used to mock their own countrymen who live in the Northeast of India that have East Asian facial features. There exists no amicable context in which ‘Chinki’ can be used in Hindi.

“At the very least,” he continued, “I would like the manager to publicly apologize to me on Yelp so all future customers can see, state what he will do to better train his workers to stop this hatred from coming back, and confirm the firing of this cashier.”

*For more on this term, visit www.quora.com/What-is-the-story-behind-saying-chinki-to-Chinese-looking-people-in-India