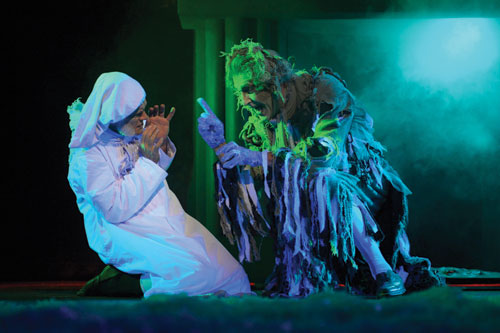 Making something new is never an easy task – especially when it is as beloved a tale is Charles Dickens’ A Christmas Carol. However, The San Jose Rep takes on this challenge in its original adaptation of the timeless tale of a grouchy, cheap man and his transformation to a generous and loving person.

Unlike many large-scale productions, the cast of the San Jose Rep’s performance plays multiple roles. Instead of utilizing dialogue to prove points, the play runs a bit like a performance-reading hybrid of sorts as characters often interject directions and narratives.

Additionally, the performance-reading hybrid actually becomes a performance-reading-musical hybrid (it’s really much less confusing than it sounds). Prior to the show, the cast treats the audience to a round of Christmas carols to help set the mood. They then travel through the crowd, greeting them and wishing everyone a Merry Christmas. Throughout the play itself, Christmas music is used just as it would be during a musical – to help set the scene or enhance a plot point.

While the entire performance sounds like it would be an absolutely mess, it actually works. Theater traditionalists won’t feel alienated by the musical performances and musical theater buffs will be pleasantly surprised. There are even comedic lines and actions scattered throughout to break up the heaviness of the subject matter.

This is the exact same production The Rep put on last year with many of the cast returning, including Scrooge, played by Alabama Shakespeare and Oregon Shakespeare Festival veteran Richard Farrell. Farrell must be called out for his fantastic portrayal of the ultra-conservative, penny-pinching Scrooge. The audience genuinely falls in love with him as the performance progresses. He brings a vulnerability to the character that is often unseen in other productions of the Christmas classic.

Another cast member deserving accolades is Ghost of Christmas Present (Collecting Man 1, Mr. Fezziwig, Businessman 3, Man with Corpse Cart, Ensemble) Seth Margolies. Margolies, another returning member from last year’s cast, has quite the presence on stage. He has impeccable line delivery and is both charming and terrifying throughout is various roles.

The San Jose Rep’s production of A Christmas Carol runs Tuesday-Sunday through December 23. Tickets are $29-$74 and can be purchased by calling (408) 367-7255 or visiting www.sjrep.com.

Be Wary: Small children may not enjoy the performance. There are a few scenes that are dark and downright frightening. Also, those with sensitivities to the smell of dry ice should sit farther back in the theater.

Our Lady of Guadalupe Sacred Drama

Arts & Entertainment
Author Melissa McKenziePosted on October 16, 2013
In an extremely personal lecture on Oct. 3, the Triton Museum of Art’s Chief Curator Preston Metcalf, took guests on a journey to the...

Arts & Entertainment
Author Larry SacksPosted on July 4, 2012
The Star Spangled Banner is played at the beginning of almost any event taking place in the United States. Over the course of a...

Arts & Entertainment
Author Cynthia ChengPosted on July 20, 2016
Imagine sharing a champagne toast at a party and witnessing the man of the hour getting shot dead by an unseen assailant among the...
SPONSORED