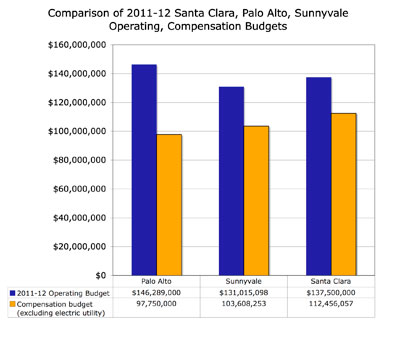 All three Bay Area cities have cut work forces and services to residents – even as population and operating budgets have grown. All three face structural deficits over the next decade driven by escalating city salaries and benefits – particularly growing CalPERs pension contributions.

However, when it comes to reserves, the picture is somewhat better in Sunnyvale and Palo Alto. While Santa Clara’s reserve fund is home only to moths at present, the two cities to the north of us still have reserves – Palo Alto, $27 million, and Sunnyvale, $25 million.

Also unlike Santa Clara, however, both are in the red – to the tune of $2.3 and $6.5 million respectively. Sunnyvale forecasts that city reserves be exhausted in 2021.

Sunnyvale city manager Gary Luebbers is ominously specific about how that will play out. After noting that at no time in the next 10 years is Sunnyvale’s revenue likely to equal its expenses, he writes, “Significant service level reductions will be required beginning in FY 2021/2022 in order to balance the budget.”

Luebbers maps out the alternatives: city layoffs, contracting out city services, raising city fees, or pension and salary reforms. “Pension reform and adjustments to survey formulas must be part of the solution,” Luebbers stresses. “This is the single most important component for addressing the long term structural deficit.” 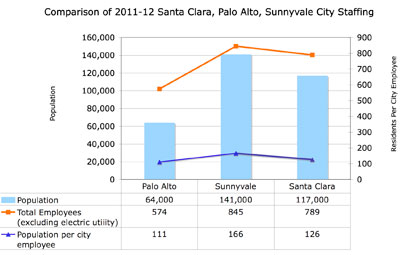 Santa Clara City Manager Jennifer Sparacino isn’t as ready as Luebbers to be a Cassandra. “Based on the best information available, the City will continue to face significant budget challenges through the Five-Year Plan horizon,” she wrote in her budget overview – leaving hanging how those “difficulties” are likely to be addressed.

And then there’s Palo Alto’s perspective. “Given the level of uncertainty created by the economic crisis, and our pending public safety labor negotiations,” wrote City Manager James Keene in his introduction to the 2012 budget, “FY 2013 [budgeting] is not practical, and likely would be subject to significant change. Thus, we have decided to focus our attention on FY 2012 only.”

Next week: Where the cities get their revenues.

A Tale Of Three City Budgets: Where The Income Comes From