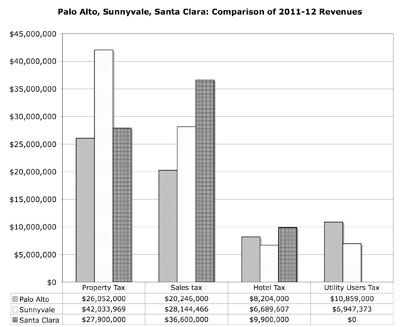 When it comes to raising the money that supports public services, Santa Clara provides a contrasting picture to its neighbors to the north, Sunnyvale and Palo Alto.

This isn’t by accident. For the last half-century, Santa Clara’s public policy has aimed to make the city a locus for industry. That industry, in turn, generates substantial sales tax revenue from business-to-business sales. While sales tax isn’t as predictable or stable as property tax, sales tax grows in tandem with a growing economy.

“We’re considered a low-cost city for business,” explains Mayor Jamie Matthews. “That isn’t just because of our low utility rates. It’s also because we don’t have extra charges for residents and businesses such as a 911 fee.”

Both Palo Alto and Sunnyvale levy a tax that Santa Clara doesn’t: A utility users tax (UUT), a tax levied on utilities such as telephone, electric, gas, and cable TV. Santa Clara does receive 5 percent of Silicon Valley Power earnings in lieu of taxes. The city doesn’t charge additional utility fees or taxes as a matter of policy, Matthews says.

“Our low electric rates are a primary economic strategy for the city. Santa Clara has quickly become the [computer] server capital of the world because of our low-cost, reliable utilities.” Matthews gives the example of CoreSite – one the U.S.’s largest Internet traffic exchange points – which operates a 200,000 sq. ft. computer center in Santa Clara.

Redistricting Anything But Fair, Say Critics