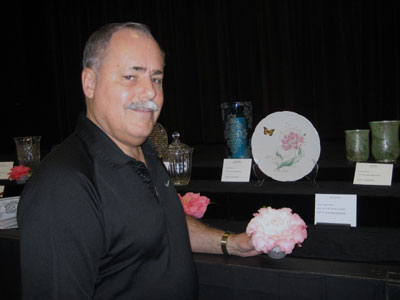 “The only thing missing is wine,” says Camellia Society of Santa Clara County board member Bill Allman at the 71st Annual Camellia Flower Show and Plant Sale February 25 and 26 at the Santa Clara Community Recreation Center.

The show had everything else. Some 3,000 competing beauties vied for honors, Donna Orme performed harp and flute music in the background, and Santa Clara Art Association members displayed original floral and landscape artwork. Ten professional camellia growers, from north of Sacramento to Fresno, competed with hobbyists for the fun of competing and to see if they could outdo one another.

“This show has the most camellias of any northern California show I’ve seen this year,” says Allman, who has attended three shows thus far. The Santa Clara show is so well regarded that five present, past and future presidents of the Georgia-based American Camellia Society attended.

“Northern California has some of the finest camellia growers in the world,” says Allman.

“The show is a way to share the fun of growing camellias and promote the growing of more camellias in our community. We hope [the people who come] get hooked,” says Society president and show co-chair John Mendoza, III. “It’s important to attract new Society members.”

“Just because camellias look so beautiful and delicate, people think they take a lot of care. We’re trying to dispel that myth by showing that anyone can grow camellias as long as they pick varieties that do well in our community.”

Camellias, which have shiny dark foliage, bloom in winter. Varieties suited to the community are planted in the garden of Santa Clara’s Triton Museum of Art. The Miss Santa Clara is a camellia reticulata originated by former Santa Clara Mayor Matt Talia in 1980.

Some of the top trophy-winning camellias and growers as determined by 35 judges:

“I like seeing all the flowers. I love them all,” says new Santa Clara resident Agot Heistein, attending the show with her son, Bill Heistein, a long-time resident.

The Santa Clara County Camellia Society (www.SCCCamelliaSociety.com) meets the 3rd Wednesday of each month September to May, 7 p.m., at the Historic Jamison Brown House, 1507 Warburton Avenue, Santa Clara (behind the Triton Museum of Art). The camellia show is co-sponsored by the city of Santa Clara. Perhaps the wine won’t be missing at the 72nd show.

Everyone All Aboard At Cal Stewart Meet