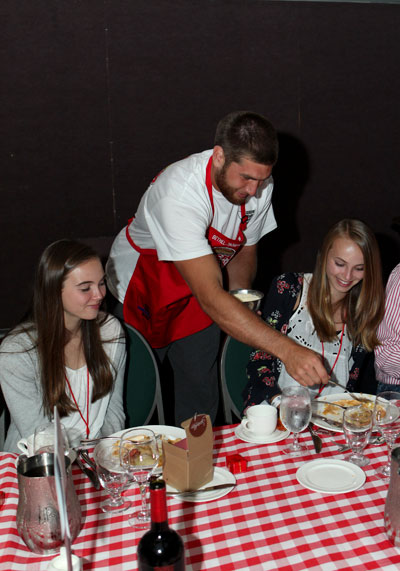 Laughing, mingling and smiling widely with attendees, players seemed to be having as much fun as event patrons, getting a well-deserved break from the practice fields at the family-style charity dinner, presented by Sandisk in cooperation with the Silicon Valley Leadership Group.

Sold out for the fifth consecutive year, raising more than $100,000 for the San Francisco 49ers Foundation in support of City Year San Jose/Silicon Valley and Fresh Lifelines for Youth (FLY), the 49ers Foundation presented both organizations with checks for $50,000 at the event.

“I just wanted to say how excited we are as a team and honored to be here tonight to be representing the organization out in the community,” Harbaugh said. “I think nobody does it better than the San Francisco 49ers, in terms of getting out in the community.”

“We are proud to be 49ers ourselves. I’ve heard a lot about the Pasta Bowl and I’m glad I got the chance to experience it tonight. On behalf of all our players, coaches and everybody at the 49ers organization, we look forward to winning for you this year.”

The event wound down with a performance from the 49ers Gold Rush, and a pizza tossing demonstration and a hands-on lesson from Tony Gemignani.

Fresh Lifelines for Youth helps troubled teens learn to make healthy decisions, providing at-risk and disadvantaged youth with vital information regarding the decisions they make in their lives.

The 49ers Foundation is the non-profit community funding extension of the San Francisco 49ers. Now in its 19th year, the 49ers Foundation supports development programs for underserved youth that keep them safe, on track and in school. A significant portion of the foundation’s funding goes toward family violence prevention programs and activities that teach youth leadership and respect. Over the past seven years, the Foundation has donated $10 million to local non-profit organizations. Visit http://www.49ers.com/community/foundation.html for more information on the 49ers Foundation.

What if a Super Bowl Came to Santa Clara?

City Politics Community Op-Ed
Author Ari FeinsmithPosted on August 26, 2022
By 2040, four times as many trains will pass through Sunnyvale daily on the Caltrain line. This raises the chances of collisions at rail...
SPONSORED