The 49ers’ proposed settlement following five years of contentious litigation with Santa Clara would net the City $3.3 million immediately and about $1 million a year in reduced Santa Clara Stadium Authority (SCSA) legal expenses. It would also bring down the curtain on a four-year-old breach-of-contract lawsuit by the 49ers over stadium management [2019 49ers lawsuit info breach of contract stadium management] as well as a Santa Clara countersuit.

The settlement is far from a done deal, however, and will be reviewed at a closed session council meeting later this month.

“I have heard about settlement talks, but I haven’t been privy to any of the details,” said Council Member Suds Jain. “I have read numbers in the press. Before that, I had no knowledge of these numbers. For a settlement, I have to have a lot more detail. If we’re doing a settlement deal, we might want to look at what’s in our contract. We’re in this marriage for 40 years and we need to be talking to our partner.”

The high-level details of the draft offer show an immediate $3.3 million infusion of cash to Santa Clara’s general fund — reducing the 2022-23 deficit to about $16 million. Much of this, however, is cash the City would have gotten anyway, albeit years sooner, had Santa Clara not embroiled itself in multiple legal actions with the 49ers.

The 49ers are offering to pay $2.2 million in disputed public safety costs plus two payments of $650,000, one directly from the 49ers and the other disbursed from the stadium discretionary fund. (Amounts over $1 million in this account are due to the general fund in any case).

In addition, the SCSA will receive $650,000 from the 49ers to pay down stadium construction debt. The 49ers will also cancel out $350,000 interest owed them for the SCSA’s late payment of the authority’s share of stadium expenses.

“Prolonged legal fights only benefit the lawyers, and we hope the City will take this significant step to restore this partnership and focus on generating revenue from the stadium,” said 49ers Communications & Public Affairs Officer Rahul Chandhok. “For Mayor Gillmor and her allies to say otherwise is just another attempt to trump up a conspiracy to cover up her own fiscal recklessness.”

The City had no comment on the proposed settlement, Assistant to the City Manager Michelle Templeton told The Weekly.

Since 2017, several of the issues in the lawsuit have been resolved, including a new accounting system to improve financial transparency and stricter procurement procedures and oversight on the part of the 49ers. Santa Clara has already allowed curfew waivers to bring high-revenue concerts and events back to Levi’s — more than five this year — and agreed to pay its share of staffing costs punctually.

There are two other legal disputes still pending; one concerning who should pay for the buffet in the priciest club seats and the second about reimbursed public safety costs. The 49ers say they hope to see a resolution on these this year.

Santa Clara has spent $5 million in SCSA outside legal expenses since 2018, as shown in SCSA financials. That was when Mayor Lisa Gillmor, her council allies and fired City Attorney Brian Doyle launched a scorched earth campaign of overt hostility and active obstruction against the 49ers; for example, imposing a concert-killing curfew and accusing the 49ers of mismanagement when event revenue went to zero.

This campaign spawned three breach-of-contract lawsuits, two countersuits and three private arbitration actions. The litigation culminated in a unilateral attempt to cancel the stadium management contract with the NFL team and led to the 49ers lawsuit that’s the subject of the current settlement talks. 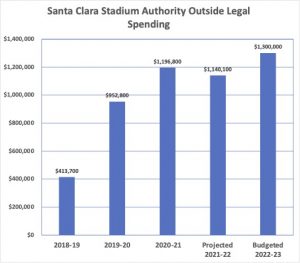 Prior to 2018, outside legal expenses didn’t even merit a separate line item in the Stadium budget. The next year, separate line items for legal costs and “legal contingency” accounts began to appear in budgets. Over the years, that budget grew from about $400,000 to $1.3 million in the 2022-23 SCSA budget, corresponding to City Hall’s increasing adversarial and hostile relations with its business partner.

“I’ve been disappointed in how much the City is spending on legal expenses,” said Jain.

Although  San José Spotlight first broke the story, this was after the San Francisco Chronicle received a copy of the settlement proposal marked “highly confidential” and apparently started making phone calls that alerted council members to the offer. Gillmor spoke at length with the Chronicle — despite the City’s official “no comment” — expressing opposition to the offer and her belief that the City had a strong case to take to trial.

From the Chronicle story, it appears that the only people who knew about the offer were Mayor Lisa Gillmor, Council Member Kathy Watanabe, fired City Attorney Brian Doyle, current City Attorney James Sanchez (who didn’t speak to anyone) and presumably City Manager Rajeev Batra (who had no comment). Other council members told the Chronicle they had no knowledge of the offer.

This is not the first time Gillmor is at the center of closed-session confidential leaks to the press. When the 49ers settled with Santa Clara in a stadium rent dispute in 2018, the Mercury News had a copy of the confidential agreement following Gillmor’s meeting with the Mercury’s editorial board.

In 2017, she had a private meeting and a public Facebook live chat with the Chronicle’s editorial page editor, and soon, the newspaper had a copy of a confidential draft SCSA audit report that the rest of the council said they hadn’t seen.

Gillmor was the principal proponent of building Levi’s Stadium and was key in approving the contracts that she now wants to ditch. In the 2017 Facebook chat, she told the Chronicle editor that the City’s negotiating team, of which she was a member, were outclassed by the 49ers’ attorneys.

Former City Attorney Brian Doyle’s role in this story is curious, as he was fired almost a year ago after concealing a settlement offer from the Council in a 2018 voting rights lawsuit. The suit, which cost Santa Clara $6 million, led to the abolition of the city’s at-large council election system and the first-ever election of an ethnic minority council member.

Doyle has threatened the City with a wrongful termination lawsuit, although he was an at-will employee and dismissed without cause. He is a close friend of former Council Member Teresa O’Neill and was hired on her recommendation. His tenure was characterized by unorthodox and highly partisan conduct. Since being fired, he has painted himself as a victim of a campaign masterminded by Jed York to destroy him.

Planning Commissioner Removed For “Misleading” the Council On Application