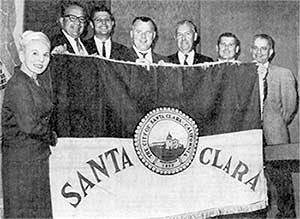 As the City Council considers changes in the way its members are elected, it’s a good time to reflect that this isn’t the first time Santa Clara has considered the governance issues that have come under scrutiny in the past year. In 1971 there was considerable discussion about whether Santa Clara’s then 20 year-old charter needed to be changed.

But 40 years ago, election methods took a back seat to other issues considered more pressing; foremost was whether the city should appoint, rather than elect, its police chief and city clerk.

In November 1971, the City Council appointed a 15-member charter review committee to consider changes to the city’s 1951 charter, reported the San Jose Mercury on Dec. 20, 1971 in a story titled, “S.C. Charter Changes Galore Proposed.” These included:

It didn’t take long for the critics to accuse the committee being politically driven, with one resident telling the Santa Clara Valley Journal that individual committee members had been “appointed because they shared the ideas of the councilmen.” Namely, that the police chief should be an appointed position.

Opponents to appointing the police chief and city clerk included those who were suspicious of the motives of then-mayor Gary Gillmor, who favored the change. A man of legendary energy who was instrumental in setting the course of Santa Clara’s progressive municipal electric company, Gillmor was Santa Clara’s first independently elected mayor. Previously, the position of mayor rotated among the seven Council Members.

Calling the question a symptom of a “power struggle at City Hall,” community activist Airi Kulpa accused the mayor of “trying to change our city government in essence from a City Manager managed form of government to a mayor-controlled political machine.”

From the same meeting comes the first mention of Santa Clara’s seat system by Council Member Charles Kinney, who proposed that council members be elected at-large and then appointed to represent particular districts. Kinney didn’t favor district elections because “they might not represent the interests of the entire city and quality candidates might be hard to obtain in all areas of the city.”

By the time the charter changes made it to the 1972 ballot, the proposal to appoint the police chief and city clerk had been dropped and Kinney’s proposal had been modified to numbered at-large seats – the same issue we’re grappling with today.

Airi Kulpa was a noted Santa Clara journalist and author who, before settling in Santa Clara, lived in Mexico City and wrote under the name Airi Andrade. Among the interesting personalities of her day, she interviewed was Leon Trotsky’s assassin Jack Mornard.

Kulpa was the author of “Adult Funnies Book 1: A Harvest of Hilarity,” and wrote for the Santa Clara American and the Santa Clara Sun newspapers. She also served on the Historical and Landmarks Commission and was an active member of the Santa Clara Woman’s Club. Her civic, cultural and community engagement merited the proclamation of a Santa Clara Airi Kulpa Day by Mayor Larry Marsalli in December 1967.

City Politics
Author Carolyn SchukPosted on August 4, 2022
Back in 2017, Santa Clara’s finance department forecast that by 2023 the City would face a cumulative shortfall of $600 million for meeting its...
SPONSORED