Santa Clara Mayor Lisa Gillmor has often blamed San Jose’s 2016 lawsuit for delaying Related’s $8 billion Northside development. But that lawsuit was settled three years ago and Related Santa Clara has yet to put shovels in the ground.

Gillmor should look closer to home for a culprit, because she was on the City Council when it leased City land on Tasman to a developer and a year later leased it to the 49ers for 800 stadium parking spaces. The problem still hasn’t been resolved, but it hasn’t been on a Council agenda since 2014.

Originally slated to open in 2016, the development was estimated to bring the City $15.5 million in annual tax revenue. Right now, only roads are being built and Phase 1 is slated to open in 2023 — seven years after promised. Related won’t start paying ground rent until they actually start construction.

There have been other reasons for the delay. Related EVP Steve Eimer laid them squarely at the City’s door in 2018. But when Gillmor couldn’t assign blame to someone else, the problems weren’t discussed at public meetings. Instead, Gillmor has always spoken as if it’s smooth sailing, focused on future benefits, despite the fact that the City has yet to see one of them.

In April 2018, Related EVP Steve Eimer wrote the City informing City Manager that there were three issues “in the City’s hands” causing “major delays”: the Landfill operation and Management (O&M) Agreement for the closed landfill under the development, “condemnation actions” of David’s Restaurant’s lease and the Tennis and Golf Club and the 49ers parking agreement.

“These delays have been so chronic that they are now affecting our ability to successfully and timely implement the Project,” Eimer wrote.

The City finally approved the O&M agreement in April of this year and revoked David’s Restaurant leases last year.

But the parking question remains outstanding, and agreement hasn’t been reached. There hasn’t been public discussion of it since 2014.

One Piece of Land, Two Leases

In 2011, Santa Clara inked an agreement with Joe Montana for a proposed development on two Tasman Road properties directly across the street from Levi’s Stadium.

A year later, Santa Clara signed a 30-year parking agreement with the 49ers for 800 parking spots on the same land.

The parking agreement specifically described the Tasman parking space set-aside, requiring that any development that displaced the parking to include additional parking for stadium events at no additional charge. 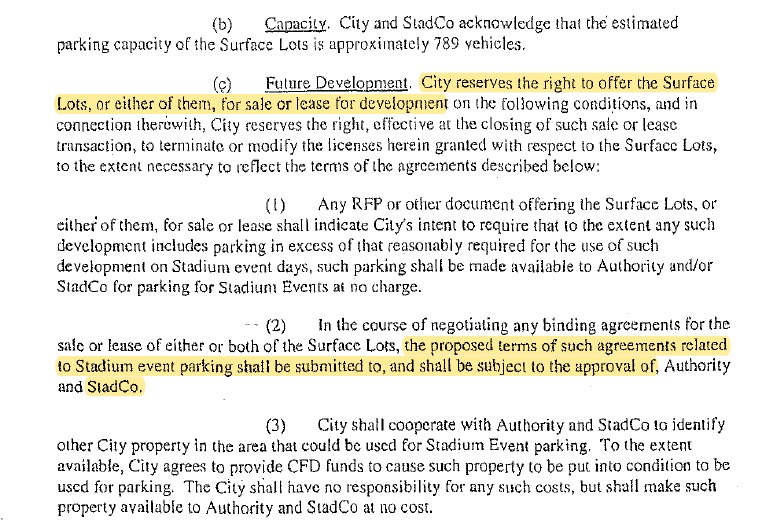 It further required the city to help identify sufficient replacement parking nearby, also at no charge; although the city is not ultimately responsible for the cost of making properties usable.

Finally, the contract says, “The proposed terms of such [development] agreements related to Stadium event parking…shall be subject to the approval of, [Stadium] Authority and StadCo [the 49ers Stadium Company].” That means the 49ers have a say in any project planned on the land.

April 2013, the City Council approved an ENA with Related Companies for development of the entire golf course. Related subsequently bought Montana out and the land became Parcel 5 of Related Santa Clara.

“With respect to the Centennial Gateway project [Montana’s project], we are sure that both the City and the Developer are mindful of the provisions of…the…Parking Rights Agreement.

“Although shared use of parking on the Centennial Gateway site is important,” MacNeil continued, “we know that this alone cannot replace the 789 stalls now located on the site,” he continued, concluding that the 49ers looked forward “to working together to identify City land for Stadium parking that can replace the 8.5 acre…site.”

MacNeil noted that some of the sites are more than a mile away, some have water on them – for example, storm water retention basins – and others are properties the city doesn’t own, such as San Francisco’s Hetch Hetchy pipeline right-of-way south of the stadium.

In his reply, Fuentes reiterated the city’s contractual obligation. “Those spaces have to be replaced if Montana does go forward. We understand and we get that. The problem can be mitigated, we can find alternatives, but we have to work together,” he said.

And that’s the last time the subject appeared on a Council agenda.

When Related took over the land, the 49ers began negotiating with them about parking spaces in Related’s development.

“We are unable to get into details of those discussions because they are ongoing, but it’s fair to say that plans have evolved to provide parking within the new development consistent with the City’s commitment to the Stadium project in the Parking Rights Agreement dated 3-28-2012.”