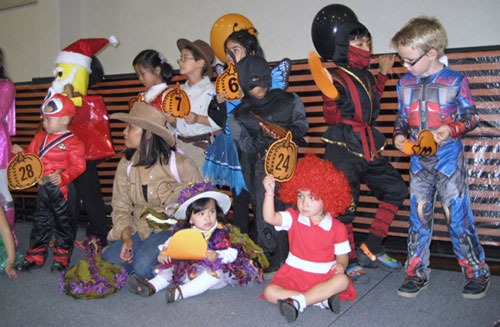 It was a veritable who’s who of the fantasy world on Halloween afternoon at Santa Clara’s Walter E. Schmidt Youth Activity Center, 2450 Cabrillo Ave., where vampires, witches, and ghouls begged for candy and played bean toss games alongside Orphan Annie, fairy princesses, and butterflies.

“This party is a must on Halloween,” said Aaminah Sheikh, whose sons, Ameen, 8, and Zain, 6, were in line for the bounce house at their 4th YAC Halloween party.

“They enjoy all the games and activities. It’s more fun than just candy,” said Sheikh. Not that the boys don’t like candy.

“Candy, parties, friends, and costumes!” the boys chimed in together when asked what they like about Halloween.

The annual, free YAC Halloween party for pre-K through 5th graders had plenty of activities inside and outside—everything from arts and crafts and movies to carnival games and photo opportunities with real life beauties like Miss Santa Clara 2013, Molly Crawford. 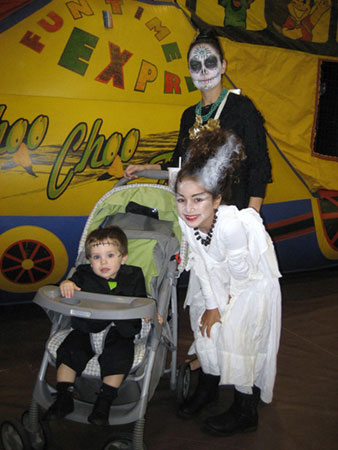 Pumpkins for the pumpkin walk were supplied at cost by the ABC Pumpkin Patch. Teacher Sean’s Music Factory entertained on stage just before the party highlight—the costume contest, judged by Renee Furtado, Dean Nissen, and Dale Seale from the Parks and Recreation Department.

Forty pre-schoolers-through-second-graders paraded across the stage in the first contest.

“We try to look for creativity and something unique,” said Furtado.

“You guys have really made it tough for us. All of you look phenomenal,” Seale said to the contestants before announcing the winners: a flower girl, minion, zombie, two Vikings, and a bumble bee.

Then third-through-fifth-grade contestants modeled their costumes. Of the 20 in this age group, winners were a vampire in her coffin, an Avatar robot, the Bride of Frankenstein, an angel, and a cat lady.

“I like Halloween because you get candy and you get to dress up,” said third place winner Mia, 9, the Bride of a very young Frankenstein—her one-year-old brother, Tyler.

“We’re very supportive of kids’ activities, and this party is always well attended,” said Department of Parks and Recreation Supervisor Gayle Ichiho, disguised as a Ninja turtle. Twenty costumed staff members with the help of more than 80 middle school, high school, and San Jose State University volunteers set up and facilitated the party, along with volunteers from the police department and library.

“The party is a real community Halloween event,” said the Ichiho.