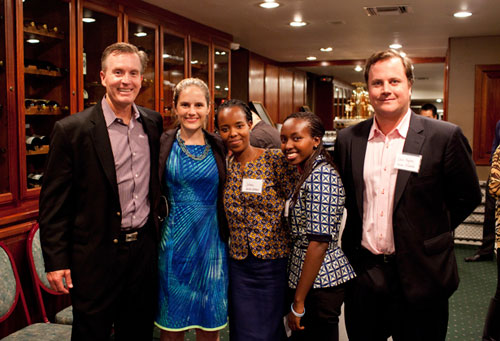 Akilah, located in Kigali, Rwanda, is a college for young women offering three-year diploma programs in Entrepreneurship, Hospitality Management, and Information Systems. It was launched in 2010 to meet the needs of both marginalized rural women and the booming private sector.

Two Akilah students, Cecile and Julian, visited Santa Clara to share their stories. Cecile, 22, lost her father in the 1994 genocide and struggled to pay school fees for herself and her five siblings. Today, she works as a journalist and radio host while studying, and uses her salary to fund the education of her younger siblings. Julian, whose family was driven out of a refugee camp, finally made it back to Rwanda in 1996 after the genocide.

The odds of a low-income East African woman finding a job are low due to lack of resources and education. It is estimated that a mere one percent of the Rwandan population has access to higher education, and a shockingly low one-third of that group is female.

According to Elizabeth Dearborn-Hughes, CEO/Co-founder of Akilah, “Akilah built a bridge connecting young women to the fastest-growing sectors of the economy. This program was designed by listening to and incorporating the needs of growing East African markets.”