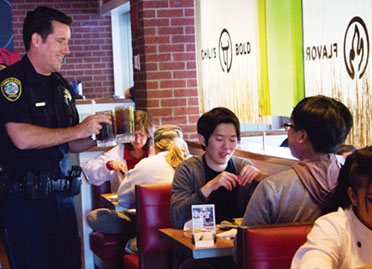 Santa Clara Police took service to a new level on April 17 as a handful of SC’s finest participated in a Tip-A-Cop event benefiting Special Olympics at Chili’s on Lawrence Expressway. From 5 to 9 p.m. officers served and refilled drinks while promoting Special Olympics Northern California. All of the officers were off duty and volunteered their time to serve the community and cause. According to Lieutenant Dan Winter, SCPD raised $1,839 during the event, ranking them second among the 21 Northern California Chili’s restaurants and police departments that participated in the event. All of the tips earned were donated to SONC and will help pay for the cost of Olympians to travel and compete.